Next post: Are you gutsy enough to take the Grit Test?

You know you are too cheap when… 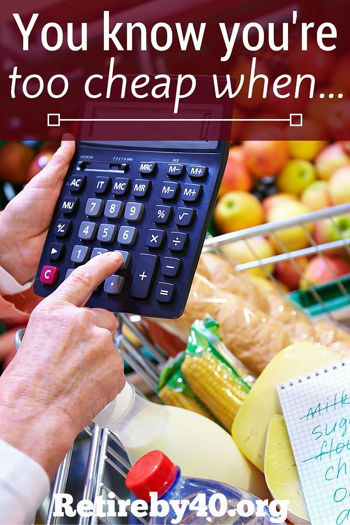 I was struggling to figure out a balance between saving and spending money when I wrote – Am I being too cheap?  Since I quit my job, our household income has decreased by almost 60%. That makes it hard to spend money even if we have some surplus at the end of the month. Today, I would like to take a look at the lighter side of being a cheapskate. Add your “too cheap” moments in the comment section!

You know you are too cheap when…

Valentine – Your Valentine’s Day card is this photo posted on your wife’s Facebook page. 😉 When you’re a cheapskate, you have to be creative. Of course, this is a collaborative effort with Baby RB40.

Library – You depend on the library for pretty much all your popular entertainment. I love our library system. It’s the only item on the annual tax ballot that I voted for without reservation. Our library system has everything I need for entertainment – books, magazines, music, movies, story time for little RB40, and free internet connection for blogging. Sure there are 918 holds on the Game of Thrones 2nd season and 0 copies right now, but I’m not in a huge hurry to watch it. I’m sure they’ll get a bunch of copies whenever they get around to it.

Pennies – You still pick up a penny from the ground. It’s been a habit for so long that I can’t leave a penny on the sidewalk. Mrs. RB40 can’t help it either. It’s not worth much and you can’t buy anything with it. Do you pick up pennies from the ground?

Money challenges – You come up with strange money challenges like a “no eating out month” or “no new clothing for a year.”  I don’t even know if this really saves money. Even if you succeed at the challenge, it seems like you’re just putting off the purchases. I’m doing well with my no new clothing challenge though.

TP – Your toilet paper is rougher than your college’s locker room TP. Mrs. RB40 went cheap one time and I haven’t forgotten the unnecessary roughness. No more cheap TP!

Coffee – You reuse coffee grounds. My parents re-brewed the coffee in our French press when they were visiting. They said they don’t want too much caffeine, but I suspect they were being super cheap.

Gasoline – You drive out of the way to fill up at a cheap gas station. I think this is fine unless there is a long line. I hate waiting in line and I have better things to do with my time. I wouldn’t drive over a few miles out of my way either.

Cheap Wedding – Aloysa @ My Broken Coin only spent $3,000 on her Cheap Broke-Ass Wedding. That is awesome! We got her beat though. We eloped and didn’t have a wedding at all. I blame it on Mrs. RB40 though. She was supposed to plan the whole thing and she got too stressed out over it. Anyway, we’ll have a lavish vow renewal at our 20th anniversary in Bora Bora (one of the destinations on our travel bucket list.) I’ll plan it this time. 🙂

HVAC – Your HVAC has been dead for a few years… Our AC went first in 2010 and the heater followed in 2011. Our HVAC is ancient and they don’t even make parts for it anymore. We’d have to replace the whole thing and it probably will cost around $5,000. I’m putting it off for now. The summer isn’t that hot around here and we can hit the pool on those rare 100+ days. Our winter is also mild and we could get by with a couple of portable heaters and our kotatsu table. I’ll have to buy another portable heater for Mrs. RB40 next winter though. She has been complaining about the cold rooms.

Freezing Cheap Fast Food – When I was in college, some of my roommates would stock up a bunch of fast food on big sales days and stick them in the freezer. $1 Big Macs and 50 cent Jack in the Box tacos graced our freezer whenever they were on sale. Yuk!!! I knew how to cook so I didn’t join in for this feast of frozen fast food.

Cheap beer – I’m sure every guy who went to college committed this sin. Crappy watery beer is the most affordable alcoholic beverage and when you’re drinking to get drunk, cheap is the way to go. I haven’t had a Natty Light since college, thank goodness. Now I only have a beer occasionally and I can afford a nice local IPA when I imbibing.

That’s all I can think of for now. What about you? Have you had a cheapskate moment recently? Let’s share some amusing stories to make this Friday go faster for the working folks.