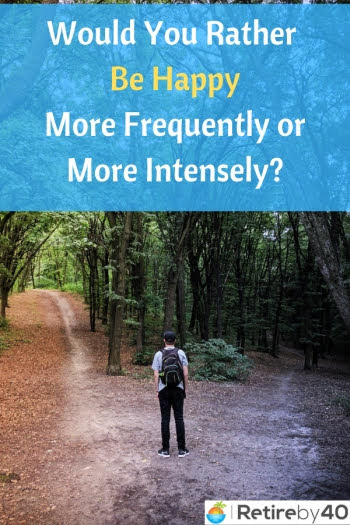 Recently, my son discovered the game – would you rather? It’s a pretty silly game when you play with an 8 year old boy. Usually, he asks something childish like this.

Obviously, I don’t like either of those options. They are bad choices with no upside. I’d rather avoid punching myself if possible. But occasionally, he’d come up with some good ones. We’ll get back to his questions later. First, I got a good one for you.

Would you rather be happy…

Would you rather be happy more frequently or more intensely?

Let use a chart to help clarify the question. (When in doubt, make a spreadsheet.)

Let’s look at the blue line first. We can see that this person isn’t too happy (or sad) on most days. However, their happiness spikes up to 9 occasionally. It also drops to 3 once in a while. This person experiences happiness less frequently, but more intensely.

Next, we’ll look at the red line. This person is a little happier in general. Their happiness level is relatively stable. There are no big changes from day to day.

Which one would you choose?

For me, I pick “more frequently.” I’d rather be happy more frequently than more intensely. I don’t like my happiness to be volatile. Yes, I’d miss out on the peaks, but I’m okay with that. Life is easier when my mood is relatively stable. Anyway, the average is better with the “more frequent” line.

Okay, I played a trick on you. Did you catch it? Here, let me chart the data in a different way.

Heh, see what I did there?

The blue line was my typical week when I was working full-time as an engineer.

I think this is typical for a lot of people. It’s the “work hard, play hard” lifestyle. You have to try to have an awesome Saturday after you’ve been stuck at work for 5 long days. Mrs. RB40 used to like her job more, but now she fits the pattern to a T. She might be ready to retire sooner than I thought.

The red line is my current retired life. I’m happier overall, but I don’t have those Saturday highs anymore. Most days are pretty similar to the previous ones. It’s an unglamorous early retirement lifestyle and I love it.

That’s my experience. I know it won’t be the same for everybody. You might enjoy working much more than early retirement. You’ll have to make a chart and choose your own path.

That’s all I got today. This is a short one because we’ve been very busy trying to squeeze all the fun out of the last bit of summer break. School starts in 9 days. I can’t wait!

Okay, which one did you choose? Why did you pick that? Let us know in the comment.

Crash into the rope swing on purpose or by accident?

Make a goal from half-court in basketball or from midfield in soccer?

Be rich, of course! Who cares what everyone thinks.

Have a great week!

Starting a blog is a great way to build your brand and generate some extra income. You can see my tutorial – How to Start A Blog and Why You Should. Check it out if you’re thinking about blogging.

45 thoughts on “Would You Rather Be Happy More Frequently or More Intensely?”