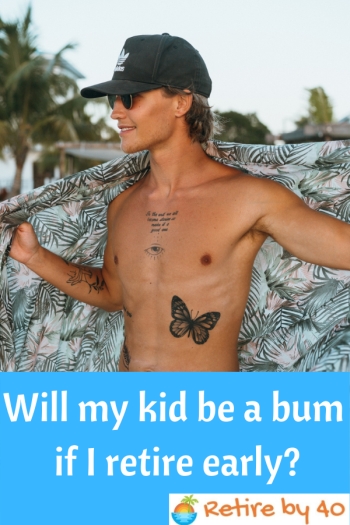 Recently, I had a chat with Don at the park*. Don is a successful young business owner. He really hates the idea of early retirement. He wants to be a good role model for his kids and he thinks early retirement is wrong. This was just a passing conversation, but he clearly thinks that I’m a bum and he’s afraid my son will turn out to be one too. To him, early retirement is the opposite of hard work. Is this really true? Don works hard to provide a good life for his family, but is that much better than what I do?  I’m a stay-at-home dad/blogger and my family has a great life too.

*This post was originally written in 2014. RB40Jr was about 4 years old and I’d taken him to the playground at the park. Life had changed quite a bit since then. I’ll give an update below. 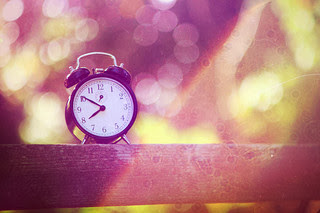 First of all, a business owner like Don can easily work 60 to 80 hours per week. I’m just blogging part-time and I spend way over 20 hours per week on this little side gig. A business has a way of sucking up all your time. I’m making some assumptions here, but let’s say Don works 70 hours per week to build a successful business. How much time does he really have to spend with his wife and kids?

Don’s family may have a nice house, luxury cars, and a big travel budget, but they won’t have much of his time. Sure, this shows the kids that hard work can provide a good standard of living, but the truth is most kids would rather have more time with their parents. I watched our son being raised by daycare workers for a year and I didn’t like it at all. I’d rather spend more time with him and teach him about life myself. I’ll tell him that I used to work hard and that’s why I can reap the benefits now. We saved and invested for 16 years before I quit my corporate job. Now, I can do what I want. I spend a lot of time with my son and it’s a happy time for us.

Studies have shown that kids with involved fathers do better in school and in life. RB40 Junior will be a genius with the amount of time and energy we spend on him. (joking…) I’m sure Don is a nurturing dad too, but working 70 hours/week will limit your time and mental energy. He’s depending on other people to raise his kids. That’s one way to do it, but I don’t think it’s very effective. My dad didn’t spend much time with us when I was a kid and I didn’t like it at all. I was resentful that he worked so much and spent a lot of time “networking”. As an adult, I can see it was necessary, but we still don’t have a very close relationship. I hope to have a better relationship with Junior, but I guess we’ll see how it turns out in 20 years.

I don’t mean to alienate everyone with a full-time job, of course. I’m sure most of you work 40-50 hours per week and still have time to spend with your loved ones. I’m very lucky to have more time. It’s a luxury to spend so much time with my son and I am very grateful for this opportunity. He’ll start regular school soon and he’ll be much more independent then. I’ll work a little bit more then.

RB40Jr is in 4th grade this year. Wow, time really flies. My life improved immensely when he started going to school. I had more time to work on the blog, exercise, run errands, and relax. Unfortunately, 2020 is different… This year, RB40Jr is virtual schooling. He’s home all the time again and it feels similar to 2014. However, he doesn’t need as much attention as when he was 4 years old so I can get some stuff done. I really hope life will go back to normal in the next school year.

In 2014, I planned to work more when RB40Jr went to school full time. That came true for a few years. I spent about 30 hours per week on this blog and enjoyed it immensely. This year, I cut back to 10-15 hours per week. It’s hard to focus with everyone at home. This slower pace is quite nice and I plan to continue with this schedule when things go back to normal. I’m getting a bit older and I don’t feel the need to be so productive anymore.

As for how RB40Jr will turn out, I don’t know. He is almost 10 years old now and his personality is still evolving. It seems he has a similar anti-establishment personality as I do. He hates school. He thinks it takes too much time and they are learning too much unnecessary stuff. At this rate, he’ll hate corporate work too. (BTW, Mrs. RB40 loves school and structured work.) We’re trying to encourage him to enjoy school more, but it isn’t working so far. He’s fine academically, he just has a negative attitude.

Anyway, I hope he doesn’t turn into a bum when he grows up. We’ll continue to encourage him to be open-minded and try different things. He might find his passion at some point. I’ll advise him to work toward financial independence so he can have more choices. He probably should become an entrepreneur and work for himself if he continues to dislike structured school/work.

I feel Don passed judgment a bit too quickly. He enjoys being the traditional provider and isn’t open to a different viewpoint. I love my life so I’m not going to let Don cramp my style. I’d rather be happy than rich and I want to pass that value to my son.

My message to RB40 Jr. is to give the same priority to happiness and wealth. We are doing fine financially and we have a happy family life. Our son is happy because he gets to spend a lot of time with his parents. I suspect his attitude would be worse if I’m working all the time and rarely spending time with him.

What about you? Do you think early retirement sends the wrong message to the kids?