Previous post: What’s Your Plan for Life After Retirement?

Have you paid attention to President Barack Obama’s 2014 proposed budget? It includes a provision to put a 3 million dollar cap on your tax-preferred retirement accounts. This proposal would generate $9 billion in revenue for the Treasury over the next decade according to White House. Actually, the limit would be based on the amount needed to buy an annuity that will pay $205,000 per year.

First of all, it seems a little silly to base the limit on annuity. The payout varies according to your age, sex, inflation, and interest rate. If you are a 62 year old female retiree, you would need almost 3.5 million dollars to generate $205,000 per year. On the other hand, if you are a 65 year old male, you would need just about 3 million dollars. I guess they will just average it and come out with a fixed number every year. Why don’t they just set the cap at $3,000,000 and adjust it for inflation every year? That seems much easier to me.

The cap is for the contribution

From what I understand, once your IRA accounts reach 3 million dollars, you won’t be able to contribute anymore. Your accounts can still go over the cap by appreciation and dividend. 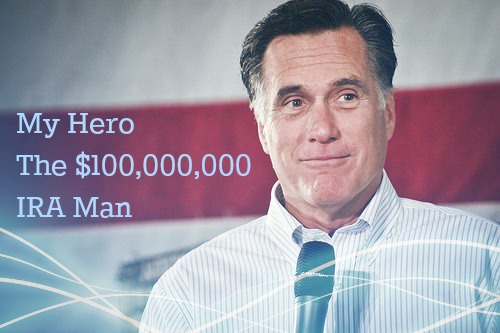 That’s my big question. The EBRI’s database has 6,180 accounts exceeding $3 million (out of 20.6 million accounts.) That’s a very small subset of IRA owners. Who could have saved that much in their IRA? Even if you maxed out your 401k for the last 25 years, you would have to be a great investor to get there.

Well, we do know one person who greatly exceeded this cap – Mitt Romney. His IRA is estimated to be worth somewhere around $100 million. Wow! That’s a load of money. How did he stuff his IRA? Nobody except his financial advisor knows, but let’s take a tour of the various ways rich folks can beef up their retirement accounts.

If you are self employed, you can contribute 20% of your income or $51,000 (whichever is lower) to the SEP IRA. Your business has to make nearly $270,000 before you can take full advantage of this benefit. My side business made $13,630 last year so I could have contributed around $2,500 extra to my retirement if I was more on the ball. Yes, if you have a regular job and a side business, you can contribute to your employer’s 401(k) and to your business’ SEP IRA.

Actually the calculation is a bit more complicated so let’s just use a solo 401k calculator. I really like this calculator because it shows SEP IRA, solo 401(k), and SIMPLE IRA. I’ll skip SIMPLE IRA because the maximum contribution is less than the regular 401(k) limit.

Here is a table if you are curious.

It would be awesome to contribute $51,000 per year to my retirement plan. Then I think $3 million would be well within reach especially if you can contribute like this over 15 to 20 years.

For regular folks like you and me, we really should just worry about just saving as much as we can for retirement. Most retirees have less than $500,000 in their retirement portfolio and that’s way under the $3 million cap. I’m not going to worry about the IRA cap at this point. I’m much more focused on living a happy life on a frugal budget.