Next post: Finding a Meaningful Life after Early Retirement

Where Would You Move to After Retirement? 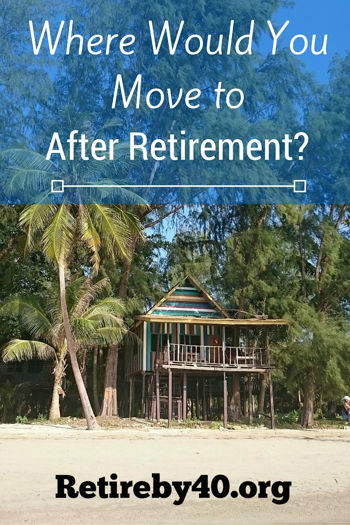 Thanks goodness the weather is improving in Portland and the rest of the Pacific Northwest. We had the wettest December ever and this winter will go down in the record books. Portland and Seattle are famous for our gray skies, but it’s really not that bad once you get used to it. We usually get a lot of drizzle, occasional heavy rain, and some sun breaks. However, we had many bouts of torrential downpour this winter and we saw much fewer sun breaks than usual. Many cities in the NW had to deal with repeated flooding. That’s no fun.

As a result, we spent a lot more time indoors than usual this winter. It was pretty depressing and I’m really glad the sun is out more often now. The flowers are starting to bloom, too. The improving weather makes a huge difference and I’m feeling a bit brighter. I’m sure my vitamin D count is very low this year and I really need a charge from the sun. Anyway, this winter made me reconsider moving after retirement. We love Portland, but the negatives are increasingly more noticeable.

When we moved here in the 90s, Portland was the perfect little city. It was just the right size for us. Portland was quaint, but big enough to have all the amenities we were looking for. Now, it’s starting to feel crowded. Maybe everything is just nicer when you’re young.

Time to move on?

Well, it’s not time to move on yet, but I’m thinking about it. We still love Portland and we want RB40Jr to have a stable childhood. My parents moved all the time when I was young and it wasn’t fun starting over at a new school. We plan to stay in Portland until RB40Jr goes off to college and then we’ll see. The good thing is we’ll have plenty of time to find our perfect retirement location. I wonder if there is such a place, though. I have a few places in mind, but they are nowhere near perfect.

We both went to college in Santa Barbara and we love that area. The weather is awesome and the beach is only minutes away. However, the housing price is ridiculous there. California also has high state income tax. I think we’ll have to take a long slow road trip down the PCH and visit the central coast towns to see if we can find the perfect beach shack. The big positive is we’ll be close to our family.

We visited the Big Island in 2014 and had a great time. The housing price is a lot more reasonable than the other Hawaiian islands. They have Costco and Walmart now so the cost of groceries is not too bad. We will probably rent for a year or two before making the move. I’d love to get a few acres and build a small compound. I’m pretty sure we can adjust to the island lifestyle, but you never know.

Hey, no state tax and affordable housing. I guess that’s why retirees move to Florida. We haven’t been there so we’ll have to check it out sometime.

I plan to live in Thailand for a few years after RB40Jr goes off to college. I can reconnect with my extended families and use Thailand as a base to explore Asia. It would be great for a few years, but I’m not sure if I can retire there long term. We also want to explore South America more so maybe we can live in Ecuador for a couple of years or something like that. Retiring abroad sounds like fun, but it probably won’t be permanent for us. I guess we’ll see how it goes.

Where would you move after retirement?

You can probably tell that I’m partial to the beach and warm weather from my retirement destinations. The downside is that housing close to the beach cost a lot of money. If you know a nice laid back beach town that isn’t too expensive, let me know. We’ll go check it out. J

What about you? Where would you move after retirement?