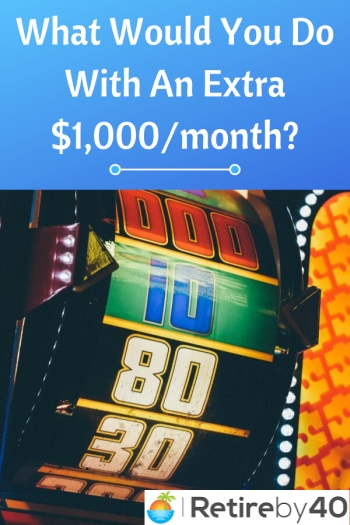 Have you been paying attention to the 2020 election? There was a Democratic debate last week, but I didn’t watch it or the previous ones. There were too many candidates on the board. Who can keep up with all the names? I just checked the polls and the field seems to have narrowed. Now, the top 3 are Joe Biden, Bernie Sanders, and Elizabeth Warren. Unfortunately, my choice, Andrew Yang, is way down on the list. Normally, I don’t pay attention to politics until it’s closer to the voting date, but I heard about Andrew Yang on NPR a few times. He has an intriguing idea that I can fully support. He wants to give $1,000 every month to every adult American! I can get behind that 100%. Let’s take a closer look at this idea and see how you can get $1,000 extra per month for a year. Yes, you can get in on the action, so don’t leave until the end.

Andrew Yang has some very good points. Automation is a big issue for everyone. Huge corporations are replacing workers with automation and AI. Amazon and other companies are making money hands over fist and they pay very little tax. Andrew Yang wants to redistribute the wealth back to the people by taxing the corporations and giving $1,000/month back to the people. He calls this the “Freedom Dividend”, but it’s an old idea. This is universal basic income.

I love it! Every American adult over 18 will receive $1,000/month. This is independent of your work status or any other factor. If you’re breathing, you’ll get the freedom dividend. This extra income would benefit struggling low-wage workers, retirees, and homemakers the most. Stay-at-home parents do a lot of work at home, but they don’t get paid. This extra $1,000/month would help a lot and probably will encourage many new parents to take time off to care for their children. This would also help workers who lost their job get back on their feet. They will have more time to train in a different field and get a new job.

*For an example, we can look at the Alaska Permanent Fund. They pay every resident $1,600 in 2018. This is mostly funded by oil revenue.

The freedom dividend will cost $3 trillion dollars per year. Where will we get the money to pay for this? Will we have to pay more taxes? Andrew Yang suggests a 10% VAT among other measures. You can read more at his faq – what is freedom dividend. If you ever visit Europe or Asia, you’re probably familiar with the value-added tax. Basically, you pay a tax every time you spend money. Andrew Yang thinks the corporations will absorb the bulk of the VAT, but I’m doubtful. Whenever there is a cost increase, it seems to get passed on to the consumers. *cough* tariff.

The VAT doesn’t sound good, but I’m pretty sure the average family will come out ahead. Even if everything is VATed, you’d need to spend over $10,000 per month to lose out. We spend about $4,000 per month so I’m not worried at all. Furthermore, housing, utilities, and groceries probably won’t get taxed. I’m sure the 10% VAT will cost us much than $1,000/month. We’ll benefit from a policy change like this.

Anyway, I think the freedom dividend is a great idea. Our current capitalist economic system is starting to show some cracks. Corporations and top 1% are sucking up all the money from the regular people. More automation and AI will only speed up this process. Inequality will keep growing and the 99% will continue to lose out. The freedom dividend isn’t going to fix all that, but it’s a step in the right direction. Regular people will have more money in their pocket. And we all know what normal American adults will do with an extra $1,000/month. They’ll spend it all and the economy will improve. This will help poor people the most. That’s why Andrew Yang has my vote.

At the last debate, Andrew Yang announced he’ll give away ten Freedom Dividends! You can sign up at yang2020.com for a chance to win. Wow! What a great way to get some votes. I like how he thinks. (Warning, he’ll ask for a donation.)

$1,000 per month really isn’t a lot of money. It will help, but it probably won’t change your life. Although, this is a better deal for married couples. $2,000 per month is enough to pay rent and grocery for many families.

Here is what I’ll do with my freedom dividend.

This has been my blueprint for a long time. First, pay yourself by saving and investing. Second, pay the bills. Lastly, spend and donate the rest. It worked out very well for us so we’ll keep doing it.

As for spending, we’ll go out more often to support the local restaurants. There are so many restaurants in Portland. We haven’t eaten at the same place for years now. I’ll also use part of it as a donation fund. Extra money is perfect for that.

All in all, I think the freedom dividend is a great idea. I don’t see any downside to it. It isn’t a huge amount so most people will still have to work. The poor and stay-at-home parents will benefit from having some extra income. People will have more choices. They can downshift and work on something they like because they’ll have a little cushion.

Get out and vote

Unfortunately, Andrew Yang seems to be the only candidate pushing the universal basic income. Other candidates laughed when he mentioned it at the debate. The audience loves it, though. The leading candidates should pick up this idea and run with it. We have to get ahead of the problem. It’s not going to end well if we continue to let corporations and rich people suck up all the money. Take a trip to LA, Seattle, San Francisco, and Portland for a preview of the coming dystopia. It’s going to keep getting worse if we do nothing. Alright, get out and vote Andrew Yang! He also has positions on many more policies ranging from Medicare for all to making Puerto Rico a state. He’s a pretty good candidate if you give him a chance.

Until September, you can enter to win $1,000 per month for a year. Ten winners will be randomly selected. Good luck!

Here is a bit more about Andrew Yang.