Previous post: 10 Things I Will Bring When We Move to Paradise

What Was Your Financial Epiphany? 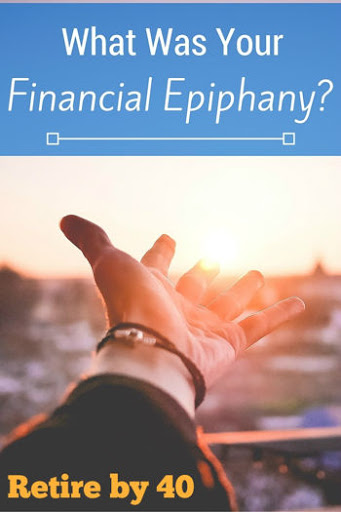 Last week, Tawcan shared his 7 phases of retirement with us. His first phase, the financial epiphany, struck a chord with me. It is so easy to get caught up in the rhythm of everyday’s life. We get up, go to work, come home, enjoy the weekend, and start it all over again. Most people repeat this cycle until they reach retirement age. If they have good financial habits, then they’ll probably be fine. However, if they spend more than they make or ignore retirement saving, then they will be in trouble when they’re suddenly 65. We all like the regularity of a rhythm and it takes a jolt to get out of our routine. If you’re reading Retire by 40, you probably had a financial epiphany at some point. Something must have made you realize that you want to retire early because Retire by 40 is not a mainstream concept. What was your financial epiphany?

Epiphany:  A moment when you suddenly feel that you understand, or suddenly become conscious of, something that is very important to you

First a little bit of background. My family immigrated to the U.S. from Thailand when I was 12. My dad was an entrepreneur and my mom was a college professor. When we moved here, the only employment options for my parents were minimum wage jobs. They made enough to pay the rent and feed the family, but they couldn’t save much because the minimum wage jobs were not stable. Eventually, they purchased a small Thai restaurant and were able to generate more income. We lived frugally for many years, but it wasn’t a big deal because we were happy for the most part. From that experience, I learned that you don’t need a lot of money or material things to be happy. I’m still thankful that my parents were educated and knew working for minimum wage won’t get them anywhere.

After college, I started working full time and my income increased from a few thousand dollars a year to quite a bit more. By that time, frugal living was already an ingrained habit and I never spent more than I made. I also started investing in the stock market early. My dad convinced me to save in my 401k when I started working. After a few years, I maxed out my 401k contribution and my retirement account has been growing ever since.

Mrs. RB40 and I got married in 1999 after she came back from her stint in the Peace Corps. She was frugal, too, so I lucked out there. Her family struggled financially when she was young and she was used to living modestly. We kept our expenses moderate and never had any consumer debt except for the occasional auto loan. We splurged every so often, but we never spent more than we made. Here are some splurges we made in our 20s.

We were doing well financially and steadily building our net worth in our 20s and early 30s. Mrs. RB40 went back to school, got her Master’s degree, and started a career in HR. On the other hand, my work situation was slowly deteriorating. The job was getting more stressful and I liked it less and less. Also, Intel was having massive layoffs every few years. I was still getting good reviews so I escaped round after round of layoffs. Then in 2009, my direct manager got the axe right before Christmas. He was a good guy and I liked working with him. He didn’t perform any worse than other managers. He was laid off because his manager didn’t like him for some reason and the group needed to meet the attrition goal. This showed me that anyone could get laid off. Even if you do good work, you need to kiss ass or else you’d get on the layoff list sooner or later. It’s probably better in smaller companies.

That was the beginning of my financial epiphany. The economy was still struggling so I was biding my time at Intel. I sent out few resumes, but nothing really panned out. We tightened our budget and saved as much as we could. It was around this time that I really got into personal finance. I didn’t like my job so I read a lot of personal finance blogs and other financial sites when I was on the computer. Soon after, I found out about financial independence and it called to me. It was in the fall of 2010, when I told Mrs. RB40 about my idea to start a blog about early retirement. She was pregnant at the time so she did not like it one bit. She came around, though.

Christmas 2009 to July 2012 was the toughest period in my life. I totally lost interest in my job and my mental and physical health deteriorated. I knew I had to find a new employer or try early retirement. By July 2012, I’d been blogging about early retirement for almost 2 years and I figured a partial retirement would probably work out. That’s when I handed in my two week notice. We saved and invested from the beginning of our career so we had a good foundation to work with. The last few years were spent paring down our expenses and saving as much as we could. In essence, the bulk of the hard work was done from 1996 to 2010. The last two years was just putting together the finishing touches.

What was your financial epiphany?

So that was my financial epiphany. The catalyst for my early retirement came from my manager’s lay off. It made me realize that any corporation won’t have my best interest at heart. They only care about the bottom line and the easiest way to boost the stock price is laying people off. I had to look out for myself and my family. Luckily, our finance had a good foundation and it only took a few years to get our ducks in a row.

What was your financial epiphany?