It’s been a while since I gave an RB40 Junior report. The last time was around Christmas when he was moving back to his old preschool. The cooperative preschool didn’t work out like we hoped. He kept asking to go back to his old school. I’m happy to report he’s really enjoys going to school now. This school has extra classes after lunch, so he gets to stay an extra hour. He’s taking Spanish, gymnastics, and cooking. That works out really well for me as well because the extra hour is extremely helpful. I don’t feel like I have to scarf lunch in 10 minutes, then rush off to pick him up anymore.

So on to the next problem. Lately, I’ve noticed that he doesn’t interact with adults anymore. Previously, he didn’t have any problem talking with adults, but something changed in the last few months. Now, he doesn’t want to talk to grownups at all (other than his parents). He either doesn’t say anything or he talks so quietly that nobody can hear him. 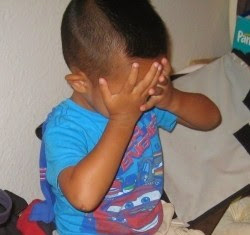 Every Friday, we go to the bank to deposit checks and get some Friday cookies. Who doesn’t love free cookies and coffee? Well, the kid just gets cookies. He doesn’t need any stimulants. Last time, the cookie tray was empty and junior was in distress about it. One of the bank tellers saw this and went to look for some cookies in the back. He brought out a cookie for the little guy and I prompted him to say thank you. He clammed up or said it so quietly that I couldn’t even hear him. I kept telling him to say thank you louder, but he just wouldn’t do it. I got pretty mad about this behavior, so the rest of the day was shot.

After that incident, I observed his interaction with adults more closely and I see that he doesn’t talk to adults anymore. I asked his teachers and they noticed the same thing. He does what they ask him to do, but he doesn’t talk to them. At least he’s talking and interacting with other kids, so he’s not a social outcast.

The apple doesn’t fall far from the tree

Of course, I consulted Mrs. RB40 about this and it turns out she had a huge problem talking to adults when she was little, too. She didn’t feel comfortable talking to adults and avoided it into her early teens. Her voice was so soft but it sounded loud in her head, and she’d make her mom mad, too, when she whispered, “Thank you.”  She never went to the school cafeteria because it meant that she would have to talk to someone else to order food. It was just easier for her to remain hungry when she forgot her lunch. Yikes, that’s not good. I want our little guy to be able to at least manage a short polite conversation with adults.

As for me, I’m a little introverted, but I’m not shy. When I was a kid, I didn’t have any problem talking to adults. I enjoy meeting new people in a 1 on 1 situation. However, I’m not great in a big group. I guess he’s taking after his mom in this instance.

It’s okay to be shy

I researched a bit on the internet and the consensus is there is nothing wrong with being shy. It’s estimated that 20% to 48% of people have shy personalities. It seems the more you push a kid, the more they will withdraw. I’ll back off for now and try not to pressure him too much. We’ll just work on building his confidence and keep practicing various scenarios. There are some locations that he’s comfortable with and we’ll try talking to adults there. The library is a comfortable spot for him. We’ll work on talking to the nice librarians.

Anyway, I guess it’s okay to be shy. I just want him to greet adults and say thank you at the appropriate times. He doesn’t need to carry on a conversation if he doesn’t want to. Although, being outgoing would make school a lot easier for him. Our society just places a higher value on an outgoing personality. Isn’t that true?

Do you have shy kids or were you one? How can we help encourage him to interact with adults more?