Next post: 8 Essential Things To Do To Retire Early

Is Your Success Due To Hard Work Or Luck?

Let’s continue with the TED talk today. For a while now, I have been meaning to sit down and listen to this talk from social psychologist Paul Piff – Does money make you mean? Their research team conducted various experiments to see how wealthy people behave. I’m interested in the topic because I’m very curious about the role of luck in life. Let’s see what they did in the Monopoly experiment. 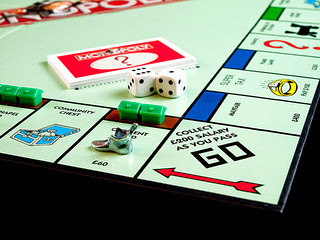 I’m sure everyone played Monopoly at least a few times when they were young. It’s one of the most well known board games in the world and even I played the game as a kid in Thailand. I never liked Monopoly much, though. Someone always cheated and the game would finish with a fight. I also remember the game taking way too long and I’d lose interest after a while. I guess being rich didn’t attract me even as a kid.

Paul Piff ran a very interesting Monopoly study with hundreds of people at UC Berkley.  First, they determine a “rich” and a “poor” player with a coin toss before starting the game. The “rich” player got more money initially, rolled more dice, and received double $$ as they pass GO.  The game was rigged so the “rich” player can’t lose.

The result was quite interesting. The rich players consumed more (pretzels), became louder, more assertive, more confident, and yes, more full of themselves. When the game was over, the rich players attributed their success to their own individual skill and talent. They felt  they deserved to win because they played well. Largely forgotten was the coin toss at the beginning to determine who would get the advantage in the game. I’m sure the loser didn’t forget that coin toss, though.

Wow, that’s an interesting result. As a successful early retiree, I feel like I’m doing very well in the game of life. I attributed this to hard work, perseverance, entrepreneurial spirit, the ability to try something new, and A LOT of luck. I know I’m extremely lucky that I have a supportive family and a good education. I also feel incredibly lucky that I live in the good old U.S. of A. Unlike many of our readers, I wasn’t born here. My parents immigrated to the US when I was 12 and that made a huge difference in our lives.

Sure, it was difficult in the beginning as immigrants, but we worked hard and improved our lives over the years. I have no idea where I’d be if we stayed in Thailand. Most of my cousins there are college educated, but there are not many good employment opportunities. Most jobs don’t pay enough for them to buy their own home and many of them still live with their parents. That’s the norm over there, though. One girl kept changing majors and she is having a difficult time finding a good career. Some started their own businesses and they are doing okay. Everyone is making do, but I feel incredibly lucky to be where I am – a stay at home dad/blogger in the US.

Start with a good hand

Now that I think about it more, I realize I started out with a lot of advantages.

Anyway, I know many of us believe we make our own luck, but is that really the case? In the personal finance blogosphere, we have to believe we are working hard to better ourselves. If you think it’s all down to blind luck or faith, then there really isn’t much to blog about.

“Luck is what happens when preparation meets opportunity.” –Seneca

Yes, I completely agree. I’m also sure that wealthy folks have much more opportunities and they are more prepared to take advantage of them. Poor folks have to spend a lot of time and effort just to make ends meet. They have fewer opportunities and they are rarely prepared to take advantage of them. In the end, we probably shouldn’t dwell on whether or  not we got the good flip of the coin. We just have to do the best with what we started out with and work hard to be more successful.

What do you think? Are you successful and is it due to your hard work and dedication? Did you start out with a good hand in this game of life?