Next post: Is Real Estate Crowdfunding Sustainable? RealtyShares Shuts Down

Why Retiring at 65 is a Terrible Idea 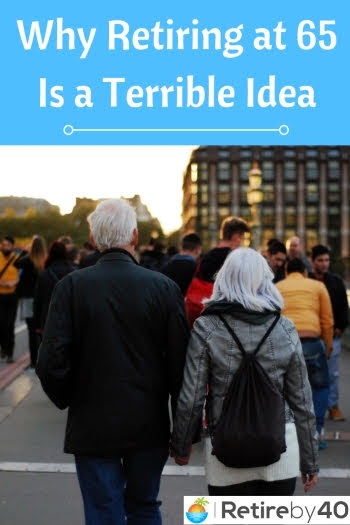 Some people say 65 is the new 45. That’s true in some aspects. In the not too distant past, a 45-year-old man would be lucky to live 20 more years. Now, the average life expectancy is higher and many of us will live beyond 85. If you look at it that way, then 65 does sounds like the new 45. However, life expectancy doesn’t tell the whole story. 65 may be the new 45, but 70 is still 70. That’s why I think it’s a terrible idea to retire at 65. You won’t have a lot of time left to enjoy a carefree retirement. Sure, there might be 20+ years left, but those years from 70 to 85 will be vastly different than 65 to 70.

*I originally wrote this post about a year ago. Unfortunately, this post turned out to be prophetic for my mom. She has dementia now and we’re struggling to deal with this adversity. Read on for the update

I’m venting a bit today because many so called “experts” discourage early retirement. You can Google it and you’d see that most mainstream columnists encourage people to work longer. Most people haven’t saved that much for retirement and they would benefit from working a few more years. That might be true for most people, but it doesn’t make sense for me. I’ve reached financial independence after 22 years of saving and investing. Why should I work until I’m 65?

Have any of these experts spent extended time with seniors who are over 70 years old? There are a lot of issues to deal with when you’re older. My mom lives with us half of the year and she changed a lot over the last few years as she approached the big Seven-Oh. I’m helping her with various issues and it’s frustrating to see the decline.

(The following sections were written last year. They are still relevant so I’ll leave them. You can see the recent development in the update section further below.)

My mom will turn 70 next year and she is relatively healthy. Right now, it’s not a huge burden to help her out. I take her to visit the doctor, dentist, and various specialists with her. Luckily, I have time during the day so these appointments aren’t a big deal. Even with relatively good health, she visits various healthcare providers at least once per month. They keep finding something new and they always want to run a few more tests.

A couple of months ago, her primary care physician found that her bone is starting to become less dense. That’s the beginning of osteoporosis. The doctor wanted her to take a new medicine. However, my mom doesn’t want to take any new pills. Nobody likes more meds, right? She debated and consulted everyone she knew. It seems like she talked about this new medicine every day for a month. She read the small print on the leaflet from the doctor and went over it obsessively. Here are just some of her questions.

It drove me nuts. I didn’t want to hear about this new med anymore. If the doctor said take it, then just take it. (I also checked with my brother who is a physician and he said she should take this.) She worried ceaselessly about the side effects, too. Personally, I don’t worry about side effects too much. I’d deal with the side effects when there is a problem.

It took about a month of debating, but she finally relented and let the doctor prescribe the new medication. Sometimes I wonder how she made any decisions when she was younger. The endless debates were exasperating. Now, I think this is due to old age. She hasn’t always been this way. When she was younger, she was capable of making decisions quickly and logically. Old age just slows you down. Actually, researches disagree with me. People gets happier as they grow older, even with some health issues.

I was hoping the questions would stop after she started the new medication, but that’s not the case. This medicine is a bit different. You take it once per week on an empty stomach and you have to remain upright for 30 minutes. No food for an hour. That’s simple enough instruction, but she had a very difficult time with this. There were more questions.

It’s not that complicated, but I had to hold her hand through this new process. To me, it seems easy. Just do pretty much everything the same except take the medicine on Saturday morning. But, to her, it’s a big disruption to the routine. Regrettably, her mental processing really isn’t working optimally anymore. I asked the doctor to screen her for dementia and Alzheimer’s last year and those weren’t the issue. I guess it’s just old age.

Dementia is often incorrectly referred to as “senility” or “senile dementia,” which reflects the formerly widespread but incorrect belief that serious mental decline is a normal part of aging.

Next, my mom told me she noticed a growth on the roof of her mouth. I took a look and it’s disconcerting. There was a growth about the size of a large almond on the roof of her mouth. It feels hard to touch and she never noticed it before. She felt very anxious about this. I sent her off to see the doctor because I had to meet RB40Jr at the school bus stop. Later on, the nurse called me and told me it was Torus Palatinus. This is calcified tissue on the roof of the mouth, which would only be removed if problematic. They asked us to check with her dentist to see if it has always been there. I called and yes, it has always been there. She just never noticed it before.

After that, she asked if she should continue to take her calcium, vitamin D, and the new meds. I told her to continue because it doesn’t have anything to do with the torus. Hopefully, that’s the end of the questions for a while. It’s frustrating to me because these are easy questions that she should be able to work out herself. My underlying fear is that I’d have a similar problem as I get older. Will RB40Jr have to help me with my pills? Ugh! I don’t like the sound of that at all. (I know it must be frustrating for my mom too.)

Unfortunately, my mom’s health declined significantly in one short year. Now she’s 70 years old and she has dementia. This is a huge change in one year. It has become significantly more challenging to take care of her.

This all started right after I wrote this post a year ago. The calcium medication continued to cause anxiety for her. Eventually, her doctor removed this medication because it was causing too much mental problem. It’s downhill after that. We followed up with her neurologist and she was diagnosed with Mild Cognitive Disorder. MCD is the precursor of dementia. About six months after the MCD diagnostic, she worsened and was diagnosed with dementia. Anxiety, restlessness, hallucination, memory, loss of independence, communication, and language, are all dementia symptoms.

I’m a SAHD/blogger so I can help her for now. However, we need to find a better solution as her condition decline. If I was still an engineer, it would have been impossible for my mom to live with us. She’d be in a nursing home now if I had to work in an office 8+ hours per day. We’re still trying to figure out a better solution that will work with everyone. I’m taking her to Thailand for 5 weeks to see if we can find an acceptable living arrangement for her. It’s all up the air right now. At least, I have the flexibility to work on this problem instead of being stuck at work.

It’s not just my mom that changed as she got older. My dad, Mrs. RB40’s parents, and my brothers’ in-laws have slowed down in their 70s. None of them want to travel anymore and health is a bigger issue for everyone. They were all pretty healthy at 65, but 70 is a different story. Everyone aged a lot in just five years.

After seeing this, I definitely don’t want to retire at 65 if I could do it earlier. There would be just a few years to enjoy the things I want to do. I want to travel around the world, take up new hobbies like woodworking, paddle board surfing, kayaking, and other fun activities. Once I’m 70, then I’d probably prefer to stay home and deal with local issues too.

Luckily, I retired from my engineering career 6 years ago and life has been very good. Well, we’d be freer when Mrs. RB40 retires too. Her target is 2020 so it’s coming up soon. We’ll enjoy our early retirement and then settle down for a slower full retirement later on. Working until you’re 65 is a terrible idea. Early retirement is much better if you can pull it off.

What do you think? Is it a good idea to put off retirement? Are your older relatives having an exciting retirement?

Note to RB40Jr: If you ever read this post and I have dementia, go ahead and find me a nice nursing home resort in Thailand. The care will be better than in the US and it will be much cheaper, hopefully. It’s too stressful to take care of someone with dementia. You shouldn’t feel guilty about it.