Next post: Should You Invest In Stock After Retirement? 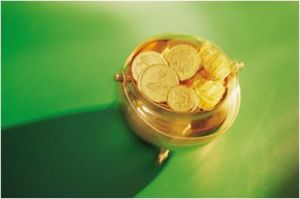 All right! I finally got my pension estimates back from Fidelity. Last time, I was leaning toward rolling it over to an IRA, but let’s crunch the numbers and see if this plan still makes sense.

First of all, the lump sum looks much better if I take it out January 2013 instead of December 2012. I’m not exactly sure why it took a miraculous 60% leap, but this is much more tempting now than when it was under $10,000.

Just by looking at the table here, I guess that the best date to receive the Lump Sum would be 1/1/2013. If I choose annuity instead, the better benefit commencement date would probably be 1/1/2039 when I’m 65.

If I take benefit before the age of 65, I would most likely invest the money. Let’s be optimistic and assume 7% rate of return. We’ll remove the first column since 12/1/2012 has already passed.

Anyway, I think we can eliminate one choice right off the bat – the 1/1/2014 column. It doesn’t seem to offer any advantage. The choice would be to either take it now in early 2013 or wait until 2039. If I take the benefit in 2013, it would be much easier to just take the Lump Sum and rollover to my IRA. For this reason, I would also eliminate the annuity option in 2013. It would be a pain to invest $66 per month.

The bottom line is if I can invest the Lump Sum and beat 5% ROI, then taking the benefit now is a better option. I can always buy an immediate annuity later when I get closer to retirement if I want guaranteed income. Today isn’t the time to buy annuity anyway because the interest rate is so low. Perhaps a good opportunity to buy would present itself in 15 years or so and I can jump on that. Or I can just take 4% withdrawal from $98,382 which is $328/month when I’m fully retired. That’s actually quite close to the projected annuity when I’m 65 ($356.)

I guess it really depends on your personality. I like to be in control of my own investment. If I didn’t have an investment strategy that I’m already following, then I would just leave it at Fidelity and take the annuity in 2039. However, I’m pretty sure I can beat 5% over 26 years (delusions of grandeur?) and that’s why I’m going to get the paperwork going and rollover the Lump Sum into my IRA.

After crunching the numbers, it seems like if you are planning to invest the money and have a long horizon, taking the Lump Sum is the winner. On the other hand, if you are fully retired and are planning to spend the money, it’s a better idea to take the guaranteed monthly payout.

What do you think?