Next post: Reader’s Question – Should I invest in dividend stock if I don’t make much money?

Do You Pay More in Taxes Than Housing, Food, and Clothing? 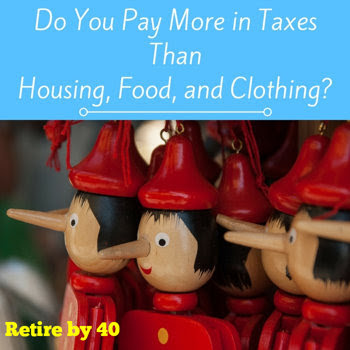 This will be a short one because we’re on vacation in Mexico. It’s an exciting time in Washington DC. The House Republicans and our fearless leader are trying to push through a sweeping tax reform. I’ve been hearing a lot about this, but I don’t have time to dig into the details today. From what I understand, the tax reform will benefit the wealthy most and everyone else gets some crumbs. The national debt would balloon, but we’ll kick that ball down the road. Anyway, I heard on the radio that Americans pay more taxes than housing, food, and clothing combined. Let’s see if that’s true and which camp the RB40 household is in.

*Take my poll at the end of the post!

Americans pay more in taxes than housing, food, and clothing

This is from MarketWatch. 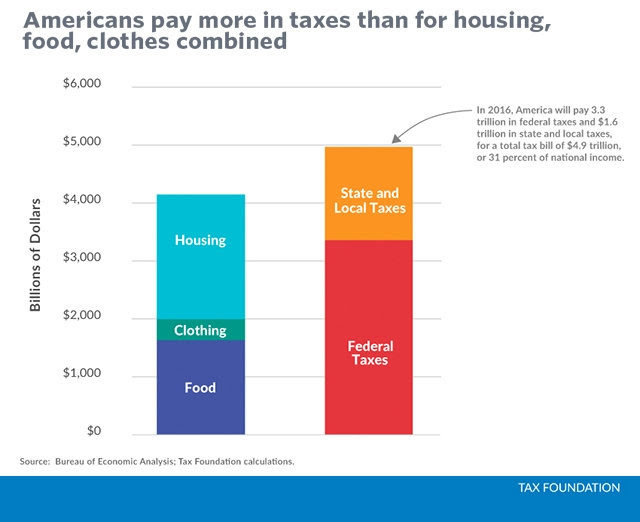 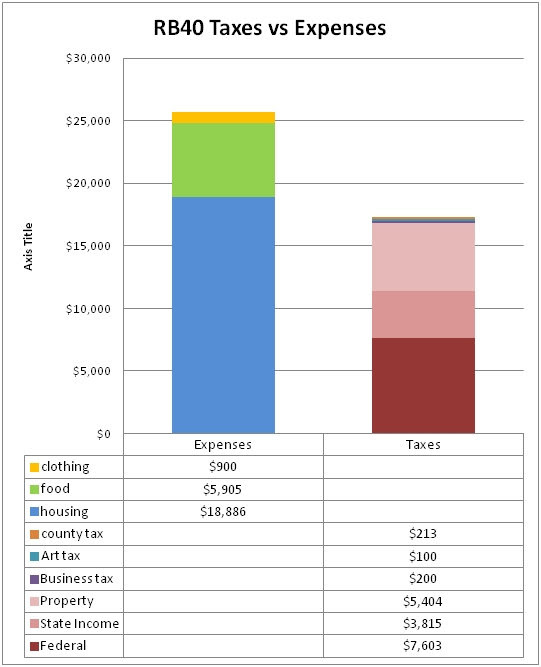 *We do not have sales tax in Oregon.

Right off the bat, our housing expense is already more than our taxes. We have a lot of deductions, though.

We made good use of the deductions. Unfortunately, the tax reform will most likely kill some of these off. It would really suck for the middle class if they lower the 401k maximum contribution. That’s a huge deduction for us.

As for expenses, our housing costs about $1,575 every month. That’s just the mortgage and HOA fee. (Not including property tax.) That’s actually pretty reasonable for the West Coast. We could do a lot better if we move to a cheaper location, though.

So, it was a NO for us. We did not pay more in tax than housing, food, and clothing combined. Now that I think about it, our tax was actually very reasonable in 2016. I just don’t see how the tax reform would help us, but maybe we’ll be pleasantly surprised. You never know until you actually do taxes yourself. Oh yeah, business tax would be lower. That would be helpful for the blog income.

What about you? Take the poll below and let us know which camp you’re in. What’s your feeling about the sweeping tax reform?