The following article is by Kristi, our staff writer. She is a great freelance writer, blogger, wife, and stay at home mom of two. 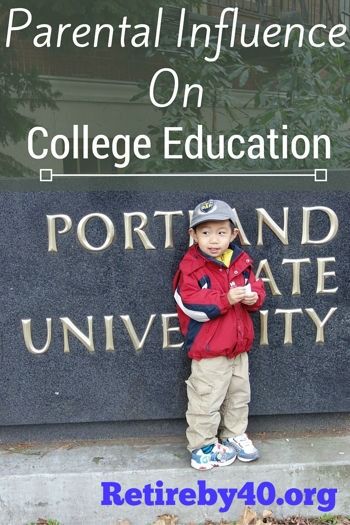 You know the old adage, “you can lead a horse to water, but you can’t make him drink”? That’s what parenting feels like 99.9% of the time.

No matter how much time, effort, and money you put into your child’s future, you can only point them in the right direction and hope that they’ll make the right choices. Parents obviously want the best for their kids, but at some point, you have to take a step back and let your kids make mistakes.

Or do you? If a parent is funding their child’s future by incurring student loan debt, do you believe that that parent has a right to guide their child’s career path?

To a certain extent, I believe they do. I, personally, wouldn’t want my kids to use hard-earned college tuition money to study Russian literature or any other major with no real career field. On the other hand, I also want my kids to be happy.

If you’re paying for their college, you have a right to want your child to be happy and have ambition, with the hope of a well-paying career down the line.

In 2013, the Consumer Financial Protection Bureau estimated that outstanding student debt was approaching $1.2 trillion. That debt has now surpassed the 1 trillion mark, and it keeps growing, with the average student debt now being more than $29,000 per student.

It’s estimated that in 18 years, the average, private, four-year College could very well cost more than $130,000 per year. Attending a state school won’t be much better, coming in at over $41,000 per year. Even using a 529 to save for college in order to fully pay for college for our two children, we would have to save roughly $4,000 per month to put our kids through four years of college. $4,000 is more than we can afford at this time.

Knowing that we won’t have enough saved for college puts us in a pretty uncomfortable situation. I know that unless our financial situation changes drastically, we will either have to take on substantial student loan debt or put off our retirement indefinitely. Whatever struggles we face to put our kids through school will be worth it, though.

Especially since we will struggle to put our kids through school, I am fairly certain that I will have a great deal to say when the time comes for our kids to pick their focus in school. When we will have sacrificed so much to be able to get them to college, we won’t want them to blow the opportunity getting a bogus degree with no real jobs in their field of study.

Does their field of study in college really matter, though? Like most things in life, it depends. A decade or two ago, it didn’t really matter as much what your focus of study was while you were in college, just as long as you had earned a college degree.

Kids need to know earlier than ever what their focus should be, especially since college degrees are more common than ever before. If they want to have any chance at all of excelling in particular fields and landing a job in a competitive job market, they seriously need to assess their choice of college focus. If your child wants to work in a field with one of the highest paying degrees, they will need to have their college focus be part of the S.T.E.M field (Science, technology, engineering, and mathematics).

You certainly can’t become a doctor of medicine if you didn’t take any math or science classes for your undergraduate degree. Having a S.T.E.M. degree will give kids an edge in our competitive job market, hopefully giving them the best opportunities to find well-paying jobs.

Is the cost and stress of funding college really worth it?

Even though we’re still facing a fairly competitive job market, one thing can still be said in favor of a college education. According to a 2014 study done by the Economic Policy Institute in Washington D.C., workers who hold four-year degrees make an average of 98 percent more per hour than their degree-less counterparts.

So it seems that even with the enormous student-loan debt problem that our country is facing, it’s still economical in the long run to take on that debt to provide a better future for yourself or your kids.

Lead them to water

Even if my children decide not to use their college degree for a career field with the same field of study, I’ll know that the cost of college will have been worth it. Even if they end up being an artist, a musician, a chef, or a backup singer on Broadway, I will never regret saving whatever I can to give my kids the best chance in life that I can give them, by paying for their college education.

I’ll steer them in the direction of S.T.E.M. careers and hopefully persuade them to pick an applicable focus of study, but in the end, we can’t force them to do anything. We have to let them make their own decisions.

Even if my kids walk away from an engineering career, as long as their educated and happy, I’ll do my best to be happy for them and their decisions.

Do you have kids? Will you try to persuade your kids to take a S.T.E.M. focus in college, or will you let them study whatever they want to study? Do you believe college will be worth the cost in 18 years?