Next post: What advice I would give my 23 year old self

Previous post: Is The Disability Program The Ticket To Early Retirement?

Why I’m not getting an iPad for our toddler

The American Academy of Pediatrics suggests that children under 2 should avoid television completely and older kids limit screen time to one or two hours per day. Studies have shown that excessive screen time can lead to attention problems later on. What about the iPad? This is a much more interactive device than a television. Should we let kids play with it? Many parents are exposing their kids to the iPad from a very young age.  Is that a good idea?

We don’t have an iPad and I hadn’t considered getting one for Baby RB40.  That is, until we played with one at the library. We had a lot of fun playing with apps like Toca Robot Lab and reading interactive books. Baby RB40 learned how to turn the pages and enjoyed making the animals move in Barnyard Dance.

The first few times, Baby RB40 was fascinated with the iPad and he didn’t want to leave even after playing with it for over an hour. He likes it because there are many apps to explore and he can interact with the iPad via the touch screen. Previously, the only interaction he had with a computer had been watching videos on YouTube. An iPad is much more fun and I thought, maybe I should get one… 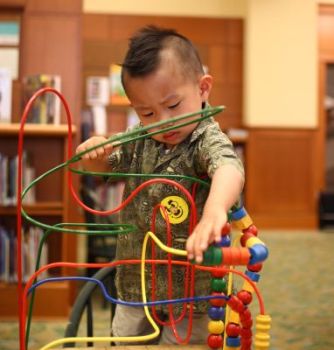 For now, I think he can play with the library’s iPad once in a while and that should be enough. At his age, I’m sure it’s better to interact with real people and real objects. Learning to read the old fashioned way is just fine with me. We spend a lot of time reading books and we both enjoy it.

What about you? Do you let your kid play with an iPad? If you do, what are your guidelines if any?

Baby RB40 recommends H is for Halloween. It’s a great book that taught him to say F is for Frankenstein. 😉

Disclosure: Baby RB40 will get a very small commission toward his college saving if you buy anything from Amazon via the links on this page.