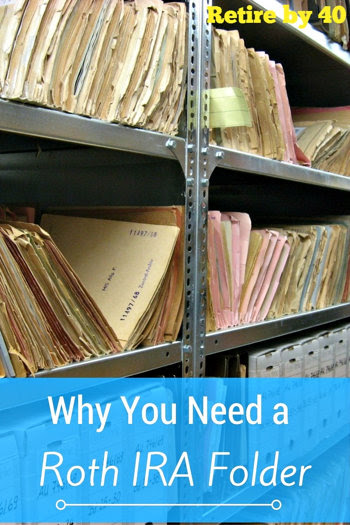 Taxes are due , April 18th! I hope you’re done and filed them already. I’m a terrible procrastinator when it comes to filing taxes. Our taxes were done a few weeks ago, but we didn’t completely finish reviewing everything until last weekend. Who wants to sit down and double check 40 pages of inane numbers?  That’s no way to spend a weekend. Mrs. RB40 has been putting it off, but she couldn’t any longer. Anyway, at least it’s done and sent off via e-file. However, during the course of doing taxes this year, I had a late epiphany. We need a Roth IRA folder, a physical old school folder to keep all the Roth IRA records. Why do you need a Roth IRA folder? Read on…

*Everyone should have a Roth IRA. It’s a great tax-advantaged account. If you don’t have one, then you might need to read this first – How to start contributing to a Roth IRA.

If you don’t know about the Roth IRA, then buckle down and read this section thoroughly. It’s not the most exciting thing in the world to read about, but you will benefit greatly from understanding the Roth accounts especially if you plan to retire early. Feel free to skip to the next section if you’re an expert on the Roth IRA.

The Roth IRA is a tax-advantaged individual retirement account. You can invest after-tax income up to the maximum contribution limit every year. In 2016, the limit was $5,500. The great thing about the Roth IRA is that you don’t have to pay tax on the gains in this account (once you are 59 ½ years old.)

This is awesome because nobody wants to pay more taxes than they have to. You don’t have to pay the capital gain tax (generally 15%) with the Roth IRA. That’s only if you’re 59 ½, though. If you withdraw early, then there will be 2 stiff penalties.

That’s a lot of taxes and it’s best to avoid giving Uncle Sam too much money.

However, there is a way to access some of your Roth IRA early without having to pay the penalty. You can withdraw your contributions at anytime and not pay taxes. That’s the money you put into the account. Makes sense to me because we already paid taxes on those contributions. Remember, the Roth IRA investment is made with after-tax income. So if you retired early and want to withdraw some money, then make sure to withdraw just the contributions. That’s the way to avoid paying more taxes.

OK, here is where we are at so far. In our Roth IRA, there are 2 sections.

There is a 3rd thing that will really help early retirees – conversion from traditional IRA. This is when you convert the traditional IRA to Roth IRA. We’ll have to pay income tax when we do the conversion, though.

Why would we want to convert from the traditional IRA to Roth IRA? That’s because you’ll be able to avoid the 10% early withdrawal penalty after 5 years. This is called building a Roth IRA ladder. Mrs. RB40 wants to retire in a few years and this is how we plan to access our retirement accounts without paying the 10% early withdrawal penalty. Anyone planning to retire before 50 should seriously consider this option.

I hope this isn’t too confusing. You can read more about the Roth IRA withdrawal at the IRS if you are a masochist.

Now that we understand how the Roth IRA works, do you see why we need a Roth IRA folder? That’s because you’ll pay different taxes and penalties depending on what you withdraw. The IRS keeps track of your contributions, but they have been known to make mistakes. It’s best to keep track of the contributions yourself as well. We need to know how much we can withdraw without going into the penalty zone.

Ok, doesn’t the brokerage keep track of all that stuff? Yes, they do. However, that’s only easy if you have just one brokerage. My Roth IRA has been at 6 brokerages! That’s way too many. Check it out.

I have my Roth IRA at Vanguard now. It was transferred from Firstrade a few years ago. However, I don’t remember where it was before that. I called Firstrade’s customer support and their record indicated that I had moved it from Ameritrade in 2007. I don’t remember this at all. My memory has never been that good on these kinds of things. I dug into our record and found that it was at Bidwell before that. Yikes!

Vanguard merged the 2 Roth IRAs together. My Roth IRA is worth about $120,000 now and I need to figure out my contributions.

The brokerages send out a tax form to show how much you contribute to the Roth IRA every year. This is the IRS form 5498. However, I don’t think I ever received this form when I contributed to the Roth 401(k). I dug into our files and I only found a few of those 5498 forms from Bidwell and Ameritrade. A few probably got thrown out inadvertently or misplaced in some other files.

I found some old statements and some of those indicated how much contributions I made in certain years. Those helped a bit, but I still don’t have the whole picture. So I had to call Fidelity and TD Ameritrade to get my records. It took a while on the phone because I didn’t even remember what year I contributed to the Roth 401(k). My memory is pretty bad… Anyway, they found them and I requested a copy. When I get them, I’ll put everything in one file with a big label – Roth IRA. Whew!

These Roth IRA records are very important if you are going to retire early and it deserves its own folder. It was painful to pull them out from the tax and the brokerage files. Luckily, the brokerages were able to help. Bidwell went out of business, though. I have a few statements from that time so I think I’m okay there.

What I can withdraw

After going through all the records, it looks like I can withdraw $96,703 without paying taxes or penalties. (I made some early mistakes with my Roth IRA and it took a long time to recover and grow.) This money will come in handy when Mrs. RB40 retires. We can start building the Roth IRA ladder and we would be able to wait 5 years with this cushion. After that, we’ll convert the right amount from our traditional IRA to the Roth IRA every year. I think $25,000 would be a good amount for our current expenses. We’ll have to see what our finances look like after Mrs. RB40 retires.

This is how early retirees can access their retirement accounts without paying the 10% early withdrawal penalty. Everyone who considers early retirement needs to figure this stuff out.

Lastly, maybe I never kept those old 5498s because I didn’t think I was going to retire early. If you wait until 59.5, then you don’t need to deal with any of this. Everything in your Roth IRA will be tax free then. But, you never know what’s going to happen in the future so you should keep good records. 🙂 Especially if you’re forgetful like I am. Now, I need to go figure out Mrs. RB40’s Roth IRA… Her early Roth IRA was with her banks and the statements are not very clear. From what I saw, her old statements didn’t show the contributions… Figuring out her accounts will be even more tedious.

Do you have a Roth IRA? How do you keep track of your contributions? It’s best to have those 5298 forms because you never know when you’re going to need them.

If you haven’t tried Personal Capital yet, check them out. Personal Capital can help you keep track of all your investments in just one place. We have many accounts and Personal Capital helps us see the big picture quickly. I log on almost everyday to check on my bank and investment accounts. Unfortunately, they won’t help with the Roth IRA record keeping. You still need to do that yourself.

60 thoughts on “Why You Need a Roth IRA Folder”