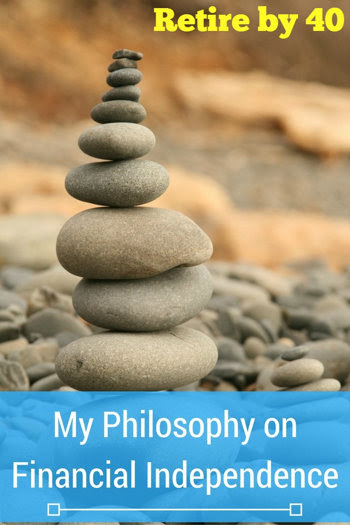 Later this week, I’ll fly down to San Diego to attend FinCon 2016, the world’s largest convention dedicated to financial content. I’ll be on the FIRE movement panel Thursday morning and I have a little homework to do. I have been asked to share my personal philosophy on Financial Independence. That’s actually kind of difficult because I never took philosophy in college. I was busy learning how to work. (Haha, a little joke to help you get through Monday…) As a former engineer, I’m more concerned with how to do something, and I usually don’t worry too much about the philosophy.

A decade ago, conversations about financial independence were quite rare. It was never discussed in financial magazines or the news, and blogging was a relatively new thing. There were some books on financial independence, but you had to dig to find them. These days, financial independence is becoming more mainstream. I see stories about FI all the time. Partly, it is because I’m in the content creation business so that increases my exposure. The awareness of FI is much higher than 10 years ago, that’s for sure. I think a lot more people know about FI and many people have made it their goal.

Anyway, FI slowly seeped into my conscious through reading various blogs and articles on the internet. It didn’t become my goal right away, because my life was already pretty good. I had a good paying job and we lived a comfortable and modest lifestyle. However, my job dissatisfaction slowly grew over the next few years. The tipping point was when my boss was fired a few days before Christmas in 2009. I couldn’t believe the company could be so vindictive. That was a classy move from a company that was starting to unravel. Everything went downhill after that. I began to hate my job, made FIRE my goal, and started Retire by 40 in 2010. I quit my job to become a stay at home dad/blogger just 2 years afterward. The timing was right and the last 4 years have been awesome. Could financial independence really be that easy?

Financial Security: Supporting a comfortable lifestyle with our jobs and save for the rainy days.

Financial Independence: Supporting our lifestyle with passive income and side hustles while minimizing withdrawal from our savings.

Financial independence was a big departure from financial security and we both needed time to convince ourselves that it would work. After 4 years of early retirement, we are still doing well financially and our journey toward financial independence continues. Mrs. RB40 is still working and we continue to save and invest. She plans to retire by 2020, but our journey still won’t be over. We will need to keep our cost of living reasonable and manage our investments to make sure our nest egg and income streams would last 40+ years. Financial independence isn’t just a destination, it’s a way of life.

My Philosophy on Financial Independence

Financial independence is like a superpower. You will be able to do things regular people can’t do. You can retire early, become a stay at home dad, travel around the world, start a business, work on your art, volunteer for the causes you’re interested in, and endless other extraordinary choices. Financial independence gives you the freedom to do what you want without having to worry about work. It gives you more choices and that’s usually a good thing.

Of course, being an engineer, I’ll have to throw in some hard numbers. I think financial independence starts when your net worth is 25x your annual expenses. The way to get there is to live a modest lifestyle and save as much as you can. Invest consistently and your net worth will increase over time. Everyone can get there with hard work, persistence, and a little luck.

What’s your philosophy on financial independence?

Looking for an easier way to manage all your investment accounts? Try using Personal Capital for free to keep track of your finances. Personal will aggregate all your accounts and give you a great overview of your savings and investments.

50 thoughts on “My Philosophy on Financial Independence”