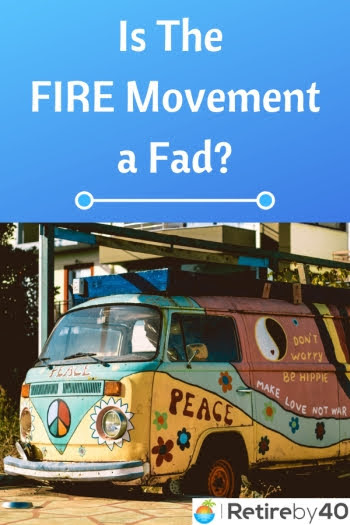 Recently, I read a great blog post at Physician on FIRE – The FIRE Movement is Here to Stay. Leif gave a great overview of the FIRE movement, then went over the current status and the future of the movement. It was a great read. Check it out if you haven’t seen it yet. My initial reaction was – yes, the FIRE movement is here to stay. Lots of people know about the concept and more are joining us every day. However, FIRE is an anti-establishment phenomenon. These movements rarely endure. It is just too difficult for most people to leave the mainstream culture. The majority will revert to the comfort of the norm. Eventually, a small core of believers will carry the torch and continue to promote the FIRE movement. That’s fine with me. I’m a nonconformist. I never enjoyed pep rallies, conventions, or big tribal gatherings. Today, I will share why I think the FIRE movement is a fad.

First, let’s quickly review FIRE so we’re all on the same page. FIRE stands for Financial Independence and Retire Early.

These two concepts are related, but they are not exactly the same.

You can reach financial independence and not retire. In fact, most people will probably be better off with just FI.

Conversely, you can retire early without reaching financial independence. You just have to figure out ways to support yourself and the family.

Of course, it’s better to have both FI and RE. They’re like burger and fries. One without the other is good, but the combo is unbeatable. That’s just me, though. I’m a FIRE blogger and I’m 100% onboard with both financial independence and early retirement.

In recent years, FIRE has become a counter culture phenomenon. Today, the mainstream media often feature young retirees on their sites. Before that, FIRE books, blogs, and podcasts have spread the word for years. As a result, FIRE is now a full-blown movement. We’re no longer just a tiny tribe of weirdos. 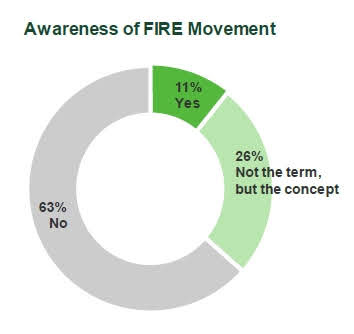 FIRE has come a long way, it’s pretty amazing. A FIRE survey by Harris Poll showed that 11% of those surveyed are aware of the FIRE movement and 26% more know about the concept (but not the term.) That’s just a third of those surveyed. It doesn’t sound like much at first. In fact, that’s equivalent to millions of people who know about FIRE. If they took this survey 5 years ago, I bet less than 1% of the people would be aware of the concept. The FIRE movement has grown significantly since I started blogging in 2010.

Have we reached peak FIRE? I have no idea. The FIRE movement is full of attractive stories. Who wouldn’t want to retire in their 30s and enjoy life? Only about half of U.S. employees are satisfied with their job. (That’s a big improvement over the last 5 years.) I’m sure many of those employees would rather retire early if they can handle it financially. It’s a good story.

Here are just a few blogs to whet your appetite if you’re reading this from your cubicle.

You can see many more early retirement blogs on my blog roll – Early Retirement Blogs for Everyone.

Their stories are fantastic. These FIRE proponents are living a great life and they’re spreading the word. When a regular person reads these stories, they want to try it too. It sounds like a dream come true to many people. However, FIRE is not easy.

The FIRE lifestyle sounds damn good, but it’s very difficult to get there. For a regular person, financial independence requires a ton of discipline. You have to save and invest a large portion of your income for many years to get there. You’ll have to live a lot more modestly than your coworkers and neighbors. Even if you save 50% of your gross income, it would take 15-20 years to achieve FI. It isn’t all under your control either. Your investments have to cooperate and perform well over that time or else it won’t work.

FI is difficult, but RE is even harder. IMO, most people can’t retire early. Early retirement sounds good in theory, but lots of people have problems with the transition. If you don’t have a nonconformist streak, early retirement will probably be difficult for you. Society does not want you to retire early. Your friends and families want you to be productive and make money. The country needs you to prop up the economic numbers. Even FIRE bloggers like making and spending money. That’s how we were raised. It’s not easy to break from tradition. Can you really turn your back on the American way and escape the rat race?

I used to think anyone can achieve FIRE, but recently I changed my mind. I think only a very tiny minority of us can attain financial independence and retire early. For a normal person, FIRE is virtually impossible. The execution phase is much longer than the planning phase. Most people won’t last.

FIRE is a fad

This is why I think FIRE is a fad. It’s a great story, but it is too difficult to execute. Eventually, most people will lose interest and go back to the established path. This has been proven again and again with many counter-culture movements.

Let’s look at the history of the hippie movement for example. It started small in the early 60s. Then it blew up and lots of young people joined the movement. By 1970, the hippie movement already started to wane. I assume many young hippies figured out they prefer having money. The hippie movement all but disappeared by the time Reagan became president. The subculture never died out completely and can still be found on communes and at festivals. However, hippies are not visible anymore unless you look for them, or live in Eugene, OR. There is an amazing hippie festival nearby every year – The Oregon Country Fair. It’s a ton of fun. Check it out if you ever have a chance.

Anyway, I think the FIRE movement is heading in a similar direction. Lots of people know about FIRE now. It sounds great and many are jumping on the bandwagon. However, FIRE is not easy to achieve. Like being a hippie, it is not an easy lifestyle. I doubt many people can commit to FIRE for 30 to 40 years. It is much easier for most people to work, save 10-15%, and spend the rest. That’s the pursuit of happiness, American style. Life is way easier as a conformist.

You know, I hope I’m wrong about this. FIRE is a great concept. Everyone should pursue financial independence. Life is great when you don’t have to worry about money. On the other hand, early retirement is optional. You need to be a little bit different to retire early. I love it, but it’s not for everyone.

Okay, let’s revisit this topic in 10 years and see if the FIRE movement is still popular. I really doubt FIRE has legs. Like the hippie movement, there will be a few core people to carry the message and some people will be on the journey. However, the media will have moved on to the next fad. Unfortunately, most regular people won’t be able to achieve FIRE and they’ll revert to the mainstream. That’s my prediction.

What do you think? Do you think FIRE is a fad? Or will it endure and thrive in the long haul?