Is Private School Worth It? 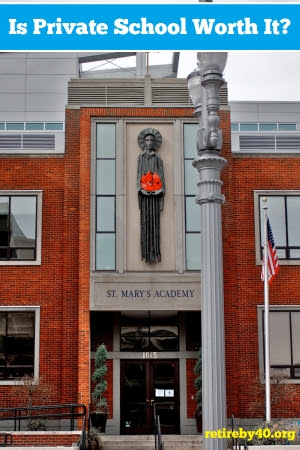 Time really flies when you have a kid. It seems like yesterday that RB40jr was born and I was still working at Intel. It’s been a very busy four and a half years and I can’t believe how fast he has grown. This is his last year at his preschool so we need to figure out where he will go next year. I know it seems a little early to start worrying about kindergarten now, but the timeline can creep up on you very quickly. The schools here usually hold an open house in February and you’ll have to submit an application very soon after. Now is probably the best time to start looking at our options because soon we’ll be busy with Halloween, Thanksgiving, and the Holiday season. There won’t be much time to research after New Year. We need to figure out if we should consider private schools, public schools, or other options.

I like the public school system. Mrs. RB40 and I went to our local public schools and met at the  University of California, Santa Barbara. We were pretty smart kids and our public schools mostly prepared us adequately for our years in college. While Mrs. RB40 did well in public school, she struggled a bit in college. She also worked as much as she could while taking a full course load in order to lessen the financial impact on her parents.

Actually, let’s rewind a bit. I grew up in Chiang Mai, Thailand and went to school there until I finished 6th grade. I attended Montfort College primary school, one of the few private primary schools in Chiang Mai. Back then, the private schools were much better than the local public schools. My parents weren’t rich, but they value education highly and were college educated. I’m sure they had to make some sacrifices to send me to an expensive private school.

When we moved to the US, my parents had to start over from scratch and they couldn’t afford private schools. The public schools here are held to a higher standard and you can get a good education in most schools. Of course, it’s highly dependent on your local school district, but generally I think the public schools in the US are acceptable.

We live in downtown Portland and our public school, Chapman elementary, is not too bad. This district is kind of unusual because it encompasses downtown and a wide swath of NW Portland. The NW Portland area is pretty well-to-do and the school had great test scores for many years. In recent years, downtown has grown and this resulted in a more crowded school along with more diversity. More diversity means more disadvantaged students as well. This is okay with me because I want RB40jr to meet people from different backgrounds and make friends with wide variety of kids. Test scores took a big dip in 2009 and have been slowly coming back. The school still ranks pretty well from what I read online. I would be fine with sending RB40jr to Chapman, but let’s explore all the other options while we’re at it.

Whew, I think that’s all the options I’ve found so far. I plan to send in an application for the Chinese bilingual program and Emerson, but I doubt we’ll get in. We’ll most likely go with our local public elementary school because it’s a decent program. If it’s not the right fit for our kid, then we’ll consider private school.

I don’t really like private school because the cost is just too high for my taste. I’d rather save the money for college. We could also use the money to expose our son to wider experiences like international travel, music lessons, and kung fu classes. I plan to stay involved with his education so I don’t think he’ll have much trouble with formal education. RB40jr is a really bright kid. He learns new things very quickly, but he has no grit. He gives up too quickly if he doesn’t succeed right away. He’s only 4 so I guess we’ll have to work on that.

Anyway, if our public school is dismal, then I would consider private school more seriously. Or we could just move a few miles south to Lake Oswego…

What do you think about private school? Do you think it’s worth the money at the primary or secondary level?