Is Hard Work Really Worth It?

The following article is from Melanie, our staff writer. Melanie is in the beginning phase of her journey to Financial Freedom and she’ll offer a refreshing point of view for us. 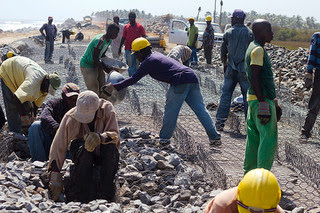 I’m not afraid of hard work. Actually, I embrace hard work and wear it like a badge of honor. Ever since I became serious about paying off debt, I’ve pushed my limits and did things I previously would have written off.

I have cleaned houses, worked holiday parties for the rich (and not famous), washed dishes, and other bizarre tasks.

I look at all opportunities equally — because in the end, money is money right? I also don’t think I’m above doing certain jobs, because I know it’s all honest work that will help me achieve my goals.

But while I’ve been working my butt off, taking a variety of gigs, some which were downright unpleasant, I’m wondering — is hard work really worth it?

Yes, the extra gigs have helped me pay off more debt and fund some other life goals. But in the scope of things, it still doesn’t seem like enough.

Perhaps this is my own fault as I say yes to low paying work, or focus on easy-to-get gigs, rather than focusing on growing my client base and raise my rates.

Either way, a big goal of mine is to make more money in 2015. I know it seems like a trite goal to have, but now that I’m my own boss, it’s on me to make it happen. I want to continue to accelerate my debt repayment and in order to do that, I need to make more money.

In my brain, making more money means working harder. I associate hard work with blood, sweat, and tears. I’ve glorified the idea of hard work and building things from the ground up.

While I still believe in the power and merits of hard work, I recently came across something that completely changed my perspective.

I read a post from one of my favorite bloggers, Paula at Afford Anything. In the post she describes traveling for a month, barely working, and yet it hardly affected her business and money making ventures.

She even admitted that she wants to work as little as possible while traveling. My initial defenses wanted to judge. How could you not want to work? Hard work equals success.

I let myself entertain the idea of “working as little as possible.” What would that mean? I think what it really means is that you are working smarter, not harder. That you are not tied to your business and that you have a means to make money passively.

I then started to question how much I work — I’m a certifiable workaholic who barely knows how to relax. I don’t even know what to do when I’m not working. Yet, I’m still human and feel the pangs of burnout when I go too far.

So in the new year, I’m shifting my thinking to how can I work as little as possible? Meaning, how can I make what I’m making now and more, with less work? How can I build passive income?

I plan to do this in a variety of ways:

Raise my rates (I’ve done this successfully for a few clients!)

Create a digital product, like an ebook (create once, can sell multiple times)

Pitch bigger clients/projects, instead of going after the small gigs

I think that I can achieve more work-life balance and grow my income by thinking this way. While I still pride myself on being a hard worker, I think there is something to be said about working smarter for your money, not harder.

Do you think hard work is worth it? What ways will you grow your income in 2015?