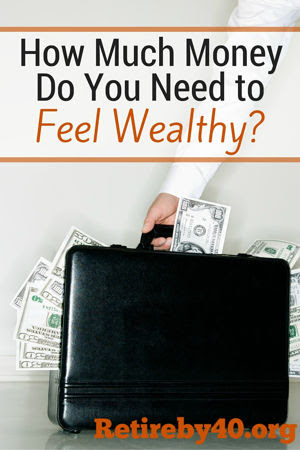 Last time, I asked – Can YOU become a millionaire? Incredibly, 95% of voters picked yes. That’s awesome, I love it! It really isn’t that hard to become a millionaire in the U.S. if you make at least a median household income of $60,000/year. You just have to commit to saving and you’ll get there. The point of the previous post was for you to pick yes. Unfortunately, a million dollars doesn’t go as far as it used to. Most people don’t even consider a million dollars wealthy anymore. So how much money do you need to feel wealthy? Let’s check it out.

*This post was originally written in 2013. I’ve updated and expanded it with the latest info. I hope you enjoy this one.

Wealth isn’t all about money

Of course, wealth isn’t all about money. Health, relationships, freedom, and happiness are all integral parts of wealth. Money won’t make you feel wealthy if you’re missing some of these. When asked about wealth in Charles Schwab’s 2018 Modern Wealth Index survey, two of the top three answers weren’t related to money. 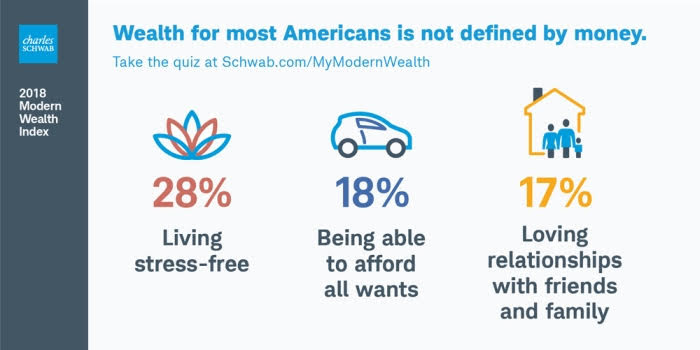 Those things are more difficult to measure, though because they are all subjective. We all have different definitions of happiness. My happiness doesn’t necessarily match yours. In fact, I think the pursuit of happiness is misguided. We can’t measure those other things, so we’ll just focus on the money today. It’s way easier to figure out net worth than happiness.

When asked to focus on just the money, respondents said it takes $2.4 million to be considered wealthy.

Really, $2.4 million? That seems a tad low to me. Our net worth is over that line and I don’t feel rich at all. The problem is the survey is meant to be representative of the US population. That means most of those surveyed are not millionaires. $2.4 million sounds like a lot of money to regular people, but millionaires don’t consider that wealthy.

Being wealthy is actually a moving target. It turns out most people need twice or more of their current net worth to feel wealthy. If someone is worth $5 million, they would say wealthy means $10 million. That’s pretty funny, isn’t it?

To back up my $5 million = wealthy theory, here is a wealth study from UBS in 2013. It’s a bit older, but investors agreed that wealth isn’t just about having a certain amount of money. The majority of investors define wealth as having no financial constraints on what they do. But when asked to assign a dollar amount to be wealthy, they say it takes $5 million.

$5 million sounds just about right to me. I’m pretty sure we’ll feel wealthy when we reach the $5 million mark. We could conservatively withdraw 3% every year. That is $150,000 per year. It will be enough for us to live a very comfortable lifestyle. That’s way more than what we currently spend, about $50,000 per year. We’ll have plenty of margins with that kind of income.

Mrs. RB40 and I could stop working completely with that kind of money. I plan to keep blogging, though. I enjoy writing and interacting with readers. You need some goals to drive you forward or else life will be pretty boring.

Do you feel wealthy?

Okay, it’s your turn. Tell us how much money you need to feel wealthy? Would it take $3 million, $5 million, $10 million, or more? If it’s not an absolute value, think about what would make you feel wealthy. Maybe doing better than your neighbors?

175 thoughts on “How Much Money Do You Need To Feel Wealthy?”