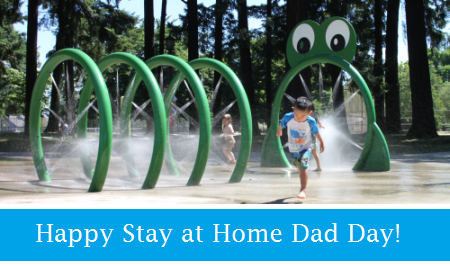 Father’s Day is this weekend and I’m inventing Stay At Home Dad Day! We should get an extra pancake because being a stay at home dad is a lot tougher than you can imagine. Anyway, it’s been a while since I wrote about RB40 Junior so I’d like bring you up to speed. Life has been pretty good in general, but we have some bumps in the road too.

Summer is here so there are a ton of fun things to do around town. The first 2 weeks of June was really tough, though. Preschool ended in May and we spent the whole 2 weeks together 24/7. Summer camp started this 3rd week so I have a little breathing room. Man, those two weeks were rough. I don’t know if I could be a 24/7 stay at home dad. Okay, let’s see what happened since the last update.

Earlier this year, RB40 Junior became very shy. He didn’t want to talk to any adults and I was getting worried. He wouldn’t say thank you when an adult did something for him or said it so quietly that no one could hear. I didn’t want him to be super shy because life is so much easier if you’re a little bit more outgoing. The comments on that post were very helpful and gave us some direction. I backed off a bit and let him have some space and it seems to have worked out. He’s back to being a chatterbox again. He chats with neighbors in the elevator. He can ask the librarian to use the iPad. He can communicate with his new swimming teachers with no problem. I wonder if it was just a phase he was going through. It’s okay to be a little shy, but I’m glad he’s back to his old talkative self.

Another thing that seems to have resolved itself was the frequent urination problem. In April, RB40 Junior started going to the restroom every 5-10 minutes and we wondered if he got a urinary tract infection. We went to see his doctor and they couldn’t find anything wrong. Anyway, he gradually went to the restroom less frequently this month and he is back to normal now. I have no idea what changed so I guess it was just another phase.

Stay at home dad doesn’t like to get mad

Things were so much easier this week because Junior went to preschool from 9 am to 1 pm. I love him dearly, but thank goodness for the summer sessions. The 4 hours at preschool makes a huge difference because it gives me a chance to calm down. It’s hard to keep my temper around him all the time. I know he is just a kid, but he really wears us down. It’s hard to describe how he does this, but I’ll try.

Anyway, I guess every 4 year old kid is difficult to deal with. I’ve been trying to give him more warnings so he’d know a blowup is coming and that seems to be helping. I don’t want to get mad at him, but sometime I just can’t help it. Having a few hours of calmness really makes a big difference. I don’t know how other stay at home parents do it. Many moms have 2 or more kids and it must be crazy. Being a stay at home dad is great, but I need a little break too.

Do you have any tips for dealing with a crazy 4 years old? Dads, how do you keep your temper with the kids? Happy Father’s Day!