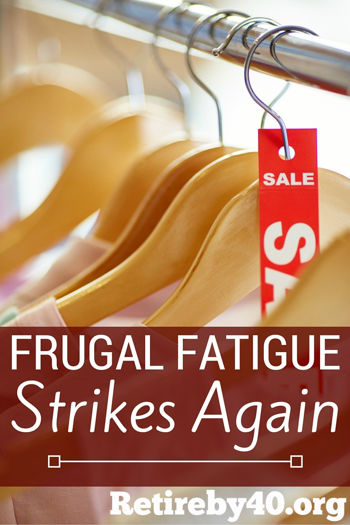 I’m having a Frugal Fatigue attack! Some of you may not be familiar with this deadly enemy of frugal folks so here is a short definition.

Frugal Fatigue: the feeling you get when you are worn down from being frugal for too long.  Basically, you’re thinking that being frugal sucks.

It seems like frugal fatigue rears its ugly head about once a year around the summertime for me. The last time I wrote about frugal fatigue was also in June. The sun is shining, school is out, my purse strings are looser, and I’m more liberal with the credit card. Could it be the nice weather? Anyway, it’s not good. Let’s see the symptoms of the Frugal Fatigue Syndrome.

Usually, it’s easy for me to be frugal, but recently I have been lusting after some new techs. It’s getting more and more difficult to resist the siren calls of these cool techs. I guess a big part of it is gadgets get outdated so quickly. Our gadgets are quite ancient so it’s easy to build a justification list.

Here are some techs that I’m drooling over. What do you think? Are they justifiable?

A new laptop – around $500 Mrs. RB40’s laptop was purchased in 2007. That’s ancient for a laptop especially when it was a budget model to begin with. I upgraded her CPU and RAM in 2009 and it helped a bit. I also replaced Window Vista with Windows 7 in 2012.

Even the upgraded CPU (Core Duo) is a dinosaur and it only has 2 GB of memory. Mrs. RB40 has been using this laptop to edit, browse the internet and catch up on her shows. Recently, ABC upgraded their site and now she can’t watch Castle, Modern Family or Scandal anymore, which doesn’t put her in a good mood. The graphic driver crashes and sometimes we get the blue screen of death (Windows crashes.) I reinstalled the driver and updated the flash player, but that didn’t seem to help.

It’s probably time to upgrade to a modern laptop at this point. I’m lusting after the newly released Haswell ultrabooks, but Mrs. RB40 will be very happy with a more affordable notebook. Retailers are clearing out their inventory for the new computers so there are a bunch of good deals now for around $400.

I have a DSLR camera and I’m very happy with the pictures I captured, but I’m tired of lugging the thing around town. Mrs. RB40 has a compact Canon S1000. This camera is the perfect size, but the image quality is pretty crappy. So I have been searching for a new point and shoot camera to replace the S1000 one. It should be relatively small with good picture quality. 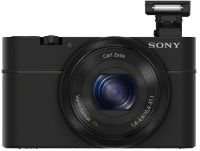 Recently I found out about the Sony RX100. From what I read, the picture quality is great because it has a big sensor and a very nice Carl Zeiss lens. It’s not as good as a DSLR, but it blows all the other compact cameras away. I really want to get this because Mrs. RB40 takes a lot of pictures and we shouldn’t have to put up with crappy image quality. Our kid is only young once and we should have nicer pictures of him.OK, I want nicer pictures of him.

$650 is quite expensive though. I heard there will be a new version soon and the price should drop a bit. I’ll keep an eye on it for now.

I have been using a pay as you go Tracfone for years now. It works very well for calling, but now I’m ready to join the smart phone revolution.  Yes, I am a very late adopter. I really hate to add a new monthly bill though and a data plan isn’t cheap. I think an unlimited data plan starts at $35 and goes up quickly from there.

A smart phone would be very useful for me. It will enable me to keep tab of my sites while I’m out and about. I also would like a GPS to help me find my way around. Actually, I would be pretty happy with the ability to access Google Maps when I’m lost.

Last week, I read about Republic wireless on Mr. Mustache and this might be a good compromise for me. Their unlimited plan is only $20 per month. The Motorola Defy XT is a bit underwhelming from what I read though. It will still be a huge upgrade from my old phone so this might work out. This would cost $250 + $20/month.

As you can see, it’s not easy being frugal. You have to have a plan to combat frugal fatigue once it hit. It’s probably time to give in and upgrade those outdated gadgets for us though. Here is my plan.

What do you think of my plan to combat frugal fatigue? Well, I guess it’s not really combating it as much as an orderly retreat… Delaying the purchase is still one of the best ways to avoid spending money. I might change my mind and stop lusting after these gadgets after a few months.

What do you do when frugal fatigue strikes?