Next post: How to Pay No Tax on Your Dividend Income

Previous post: Are You Hoping for The Stock Market to Fall? 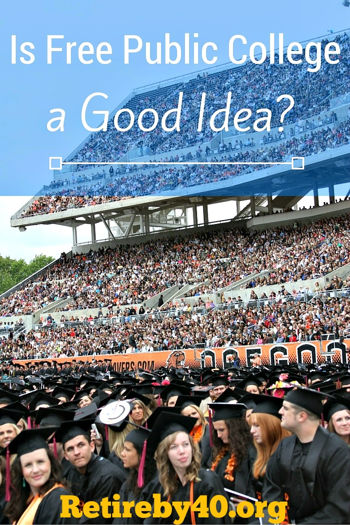 Bernie Sanders, a Democratic candidate for the President of the United States, plans to make public colleges free for every American who wants to attend. When I first heard this, I thought it was a great idea. The cost of higher education has been increasing much faster than inflation and new college students are borrowing a lot of money to fund their tuition and other associated fees. The average “class of 2015” graduate with student-loan debt will have to pay back around $35,000. It’s tough to start off in a hole. Wouldn’t it be much better if public colleges were free?

We need a better educated workforce for the future. Making college tuition free would encourage more people to go to college and increase the education level of our workforce. A high school diploma isn’t enough to compete even now. In 15 years, a college diploma will be required to get any decent paying job. I want my kid to go to college and I’m sure most parents want the same. We are saving diligently in his 529 to help pay for higher education. If college tuition were free, we could reallocate that saving toward our retirement instead.

The cost to make public college tuition free will be $75 billion per year. Bernie Sanders plans to pay for this by imposing a small tax on Wall Street transactions. It’s even got a nifty name – the Robin Hood tax. Stock transactions would incur a 0.5% tax. Bonds and derivatives would have a smaller tax. Make Wall Street pay for higher education. Sounds good to me!

Imagine my surprise when I heard that many economists think free college is a bad idea. (NPR’s Planet Money: If Elected President) What’s their problem? Let’s take a closer look.

Free college tuition sounded good when I first heard it, but not so much after I did some research. I don’t know if all of these problems will really come true, but free tuition doesn’t look very attractive anymore.

It’s not good to accumulate a lot of student-loan debt, but the benefit of a college education still outweighs the cost. If you bust your butt and work hard, you should be able to pay off those debts relatively quickly. Melanie, our former staff writer, just paid off $81,000 in student loan debt by working like mad and eventually starting her own business. Do we really need another entitlement program? It might be better to focus on lowering the cost of higher education instead of opening a new can of worms by making college tuition free.

What do you think about free college tuition? Will you vote for Bernie?