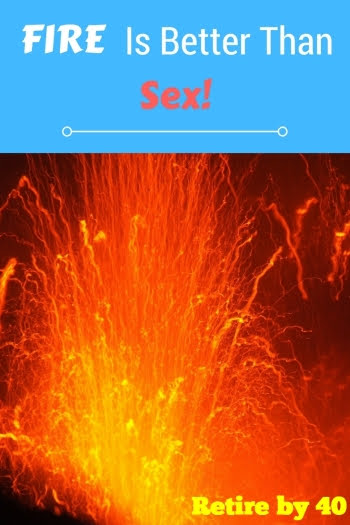 Whoa whoa whoa! What’s this FIRE thing and why is it better than sex? Welcome new readers. Yes, this title is clickbaity, but don’t leave yet. This post is going to be good. First, we’ll quickly go over FIRE. Then, I’ll summarize my FIRE journey and see why it is so great. We’ll circle back to sex at the end of the post.

FIRE stands for Financial Independence and Retire Early. These are two closely related concepts squished into one.

FIRE is the holy grail of personal finance. Once you’ve achieved FIRE, you’re at the peak of your personal financial success. Money will be a secondary concern and you can focus on life. Fortunately, FIRE is attainable for almost anyone and it is an awesome goal to have. It gives you something to shoot for. FIRE vastly improved my life and I highly recommend chasing it.

Personally, FIRE was a revelation. I learned about FIRE around 2009 through personal finance blogs. At the time, you rarely saw stories in the mainstream media about a young person retiring early. There were great books like Your Money or Your Life and Early Retirement Extreme, but you’d never find them unless you were actively trying to find out more about FIRE.

Luckily, I’ve always been frugal. My family struggled financially when I was young so that drove me to seek financial security. By the time I found out about FIRE, I was already most of the way there. I started Retire by 40 in 2010 and quit my job in 2012. Two years might seem exceedingly fast, but I’d been working toward FIRE since 1996. I just didn’t know it.

We achieved baseline financial independence in 2011. Our net worth exceeded 25x our annual expense for the first time. This didn’t change my daily routine, but it gave me the confidence to seriously consider early retirement. It also gave Mrs. RB40 the courage to buy off on the idea. This one is extremely important. If you have a family, then you need full support from your partner. Single people can do whatever they want, but a family has to work as a team.

In 2012, I retired from my full time job to become a stay-at-home dad/blogger. FI was neat, but it didn’t change my life. On the other hand, early retirement was life-changing. By 2012, I hated my job and I was one miserable dude. My work performance was suffering badly. Family life was stressful because we had a baby. My physical and mental health was in a steep decline. It was a bad situation all around and I’m glad I made it out. Once I quit, I found my happy go lucky self and our lives improved immensely.

I’ve achieved the ideal FIRE and life has been great over the last 5 years. FI was a crucial step for me to get to early retirement. One without the other would not have worked for our family. I would not have retired early if we weren’t financially independent.

Making FIRE my goal was also an important step. If I didn’t know about FIRE, then I might have squandered the money to blow off some steam instead of investing. FIRE gave me direction and a focus. My last two years at work were damn miserable, though.

Don’t FIRE at the expense of happiness

Okay, we’ve come to the crux of this post. There was a rash of FIRE posts over the last few weeks. While they were good articles, they didn’t jive with my experience. Let’s go over a few. By the way, these blogs are great. You should follow them.

Mad Fientist – Hierarchy of Financial Needs (and the Meaning of Life). FI can be unfulfilling and you should not be obsessed with it. You need to move pass FI. Sure, I agree with the Mad Fientist on most points, but FI is awesome. More people should make it their goal. It is okay be a little obsessed with it. Brandon can philosophize about it because he already achieved FI and has the time to do it. If you’re not there yet, then keep going and don’t worry about what happens post FI. You can figure it out once you get there.

Get Rich Slowly – On the importance of putting first things first. Many people who discovered FIRE became laser-focused on their “number.” Why are they saving for FI? What’s the purpose? For me, it was simple. I wanted to quit my job. You don’t have to know the why as long as you are moving in the right direction. It helps, but it isn’t 100% necessary. I agree that focusing on FI at the expense of family life is a bad idea. JD is back at Get Rich Slowly so it is a great blog once again. Check it out if you haven’t visited in a long time.

Tawcan.com – FIRE. RIP. 2014 – 2018. Bob wrote that FI shouldn’t be the finish line. If you’re not happy with your current life, you probably won’t be happy after FIRE. That wasn’t the case for me. FIRE improved my life immediately. I was miserable before and now I love every day. FIRE enabled me to remove a lot of stress from my life and to work on the things that matter.

These posts have a lot of good points. FIRE isn’t a cure all. Life might not be that much better once you’ve achieved it. Yes, it’s probably better to improve your life now instead of obsessing about FIRE. However, I still think FIRE is a great goal to shoot for.

From my experience, FIRE is better than no FIRE any day of the week. You have more choices. If you don’t enjoy FIRE, you can get a job and go back to a regular life. JD and Mad Fientist have the luxury to analyze life after FIRE because they already made it. I think it is more important to keep making progress toward FI than worrying about what comes after. You can figure it out once you’re there. You’ll have plenty of time to do it.

Being obsessive about FIRE

Being obsessive about FIRE is another story. I was laser focused on FIRE for about 2 years. I cut back on our expenses and invested as much as I could. My health and family life suffered from the stress of working in a job I didn’t like. Would it have been better to slow down? Maybe find a different job that paid less and was more enjoyable? I don’t know, but I’m glad I pushed through it. Being laser focused enabled me to become a stay at home dad while our kid was still young. That’s priceless. It all worked out fantastically.

I think it is fine to be obsessive for a year or two at the end. Sometime you just have to push through the pain to get across the finish line. However, it is not good to operate this way for years on end. The guy in JD’s post was obsessed with FI for 7 years and it drove his wife away. That’s not a good ending. (I also think the problem really isn’t his obsession with FI. He just didn’t listen to his wife.)

If you’re at the beginning or middle of your FIRE journey, then you need to balance FIRE with family and happiness. You can’t be miserable for years and years. Two years was my limit and I’m glad it didn’t last much longer.

Fire is better than sex

Anyway, I just wanted to share my experience with FIRE. It worked out great for me. FIRE gave me direction and it was everything I imagined. Life is much better after FIRE. It might not work out as well for you, but you won’t know for sure until you get there. The only thing I can guarantee is that FIRE is better than no FIRE. FIRE gives you more choices and you’ll have time to work on what’s important to you. It really is the holy grail of personal finance.

Okay, now we’ll get back to sex.

I suppose it’s too late to change the title now. 😉 Anyway, FIRE is way better than sex because it’s a long term state of happiness. I’ve been euphoric for more than 5 years now and it will only get better. Sex is great too, but it doesn’t last that long…

All right, that’s it for today. Good luck with both FIRE and sex. 😉

46 thoughts on “FIRE Is Better Than Sex!”