Hey everyone, we’re on vacation this week and Tim is covering for us today. Check out his post and let us know what you think. I’ll be back from Hawaii next week.

I’m a self-made millionaire immigrant and a VP at a mid-size company based out of Orange County, California. I moonlight as a personal finance & fitness blogger, business consultant, personal trainer, and success coach. I’m 31 years of age, a firm Christian, with a wonderful wife and son. You can connect with me on Instagram, Twitter, LinkedIn, or YouTube over at my blog, Tub of Cash. Thank you for reading! 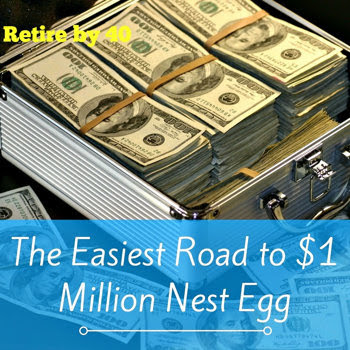 Let me start off with a question:

What does a dollar mean to you?

Let’s be honest; for the vast majority of us, $1 is fairly insignificant. But have you ever taken a moment to ponder what $1 might be worth if you decided to not spend it today? 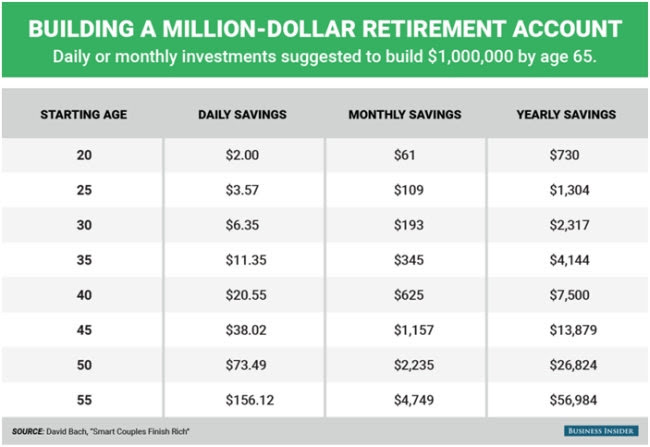 So that $10 meal or movie ticket you bought over the weekend? That’s close to $370 of tomorrow’s dollars that you decided to spend today! In other words, that was a $370 burrito or a $370 movie ticket! Talk about expensive!

Now the point of me saying this isn’t to get you to agonize over every dollar spent; but rather, to give you a gauge of the value of money and just how much even just $1 can be if you if invested properly. So if the take-away and end result from this post is that you reduce your spending by just $1 a day/week/month; even that, to me, is a win because that’s a net positive of $37 for every $1 saved, for an 18 year old entering adulthood.

Have you ever had the thought, “there’s just no way I can save with so little wiggle room in my budget; I’m living pay check to pay check!”

Rather than giving up because there’s just no additional fat to trim from your spending due to reasons X, Y, and Z, what if you thought of it from a different angle?

You don’t need me to tell you that anyone (at least here in the US) can make at least $15/hr driving for Lyft or Uber. And you don’t even need to go through an interview or have a boss to report to, no deadlines to meet, no coworkers you have to deal with, and no office politics. You can make that decision today. You can hop in your car right now and start making an extra $15/hr. And it doesn’t have to be all-or-nothing. You might find the time to do just 1 hour a week, which would be equivalent to making a little over an extra $2 a day!

Don’t leave your future up to chance

I know of no one who doesn’t want to save more money. It’s a universal and inherent need for human beings. But it surprises me how few people save; but what’s more surprising isn’t that they’re not saving. What’s more surprising are the excuses why they aren’t saving! When even a few dollars a day can set you up for a healthy retirement, there are simply no excuses! I also see this fairly often with people who are teens or young adults. The mentality of “I can always save more later.” But why make it harder for yourself? Take a look again at the graphic from Business Insider that I posted above. The longer you wait to save, the harder you’re making it on yourself. And if you’re a young adult reading this, in his/her 20’s or maybe even younger, you have a very high probability of retiring as a millionaire (or even retiring early in your 40’s or 50’s which is called FIRE – Financial Independence and Early Retirement) if you stick to these basic mathematical principles.

Related: Did you know you can retire early?

How my wife and I used these principles

I’m not too keen on touting exactly how much money we have; but for the sake of using us as an example (walking the talk), I can tell you that we, as a household, reached millionaire household status earlier this year (if we include the equity in our home). I’m 31 years of age, and my wife is 30.

So how did we do this? We did exactly the stuff I mentioned above! Here are some examples:

I came here to the US in 2004, with about $500 to my name. My first car was an old $1,500 ford escort. Not poverty…but not affluent by any stretch of the imagination. My parents are missionaries; my dad is a pastor. So there was no silver spoon.

I got my job right out of school by sending resumes online (via Career Builder and Monster). Because I had zero connections I found a job at the will call counter (warehouse customer service). I worked two jobs (my 9-5 and personal training on the side; and selling my own private-labeled fat burner supplement). My wife worked night shift and went to school on top of that.

My wife’s side of the family are wealthy but they are truly self-made. Her father came to the US when he was in his mid-20’s. So he had to learn English and a whole new culture that late in the game. He went to community college and ended up transferring to Berkley. He later went on to graduate from dental school and now he’s a practicing dentist.

That said, because my father-in-law is a self-made person, he’s a big believer of independence and self-reliance. So when he allowed me his daughter’s hand in marriage, he was very direct about there being no financial help from his end. We were on our own. So because we started with a clean slate, and no financial boost, we purposefully made the decision to live frugally.

For our housing, we paid 1/3 of what others were paying by renting a room from a friend for 6 years. Even after marriage, my wife and I stayed there 3 years in order to save money for a down payment on a condo. Going this route was a sacrifice that my wife and I both mutually agreed upon. And this is a cultural thing in Korea, but as the “man” of the house, there were times I got a lot of flak from relatives on both sides of the family. Additionally, I had to fight my own ego of feeling like I wasn’t providing a “suitable” home to start a new family in; and the feeling of inadequacy that accompanied that. But I knew that we were making the right decision, and that we’d be vindicated in the end. So we hustled like crazy. We saved like crazy. And we invested like crazy.

Blessings abound; but seize the opportunities!

Having said all of that, here are some of the insane blessings we’ve had the fortune of having:

And last but not least, it would be wrong of me not to mention God’s grace in our lives. We feel very blessed and supremely fortunate.

Since we’ve gone over, mathematically, how anyone can hit $1,000,000 if all one did was invest just a few dollars a day, you have no excuse! Secondly, if you feel like you’ve already pruned your expenses as much as you possibly could, rather than trying to trim your budget further, try to look for opportunities to make an extra $1 a day. Thirdly, this is all math and is based strictly on your time horizon. So the longer you wait to invest, the harder you’re making it on yourself. Fourthly, be smart with your money and don’t let your ego stop you from reaching your goals. As human beings, we tend to do stupid things just to impress others. At the end of the day, we’re probably overthinking it because most people aren’t looking at you or me. They’re looking at themselves and worried about how they’re being portrayed. So it’s just a colossal waste of time, for all involved. Lastly, seize opportunities when they present themselves. You’ve probably heard of the saying that “luck is when opportunity meets preparation.” So continue to hone your strengths, and make the effort to work on your weaknesses. And count your blessings along the way.

“You only have to do a very few things right in your life so long as you don’t do too many things wrong.” – Warren Buffet

So what does a dollar mean to you? Are you assigning enough value to the money that you’re spending? And are you taking into consideration the negative implications that way of spending is having to your financial well-being? What are some actionable steps you will take starting today to build a better future for yourself and your loved ones? Share and discuss in the comments below!

48 thoughts on “The Easiest Road to $1 Million Nest Egg”