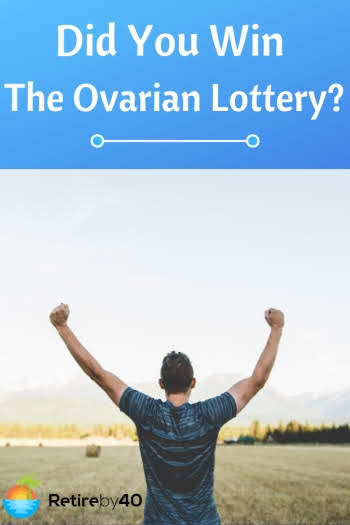 *I consider being born in Canada, Australia, and most countries in Europe winning the ovarian lottery, too.

Let’s look at Powerball, the biggest lottery in the US. You select five numbers from a set of 69 white balls and one number from 26 red balls. If your picks match the drawing, then you win. Here is the payout chart. 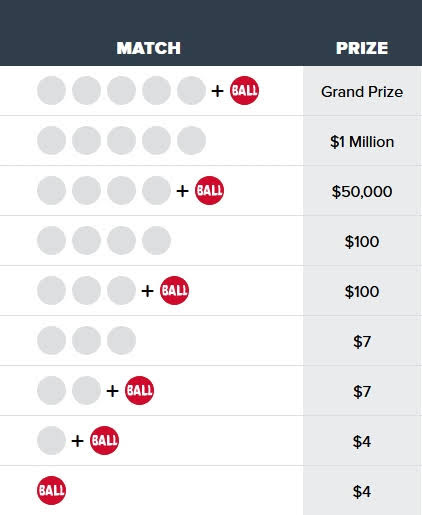 So it’s not that difficult to win something, but the jackpot is really tough to hit.

Warren Buffett is a special individual. His red Powerball is being born to the right family, at the right time, with the right anatomical bit. His dad, Howard Buffett, owned a small brokerage and encouraged his son to learn about investing. He had a headstart with investing.

Warren Buffett has 2 sisters and he said they are just as smart and ambitious as he is. However, opportunities for females were limited at that time. “They could be teachers or secretaries or nurses, and that was about it.” Lastly, Warren Buffett is Caucasian. It’s not hard to imagine that Oprah Winfrey had a tougher road to becoming a billionaire than he did.

Warren Buffett is naturally frugal. He has simple tastes and dislikes spending money on himself. He could eat a hamburger and cherry coke for the rest of his life and be satisfied. His clothes, cars, and homes are modest (for a billionaire). Not many people are like that. I’m frugal, but I enjoy the complexity of life. I like trying new foods, driving nice cars, traveling to new places, and playing with cool toys. If I was a billionaire, I’d live it up. For me, it’s a constant battle to stay frugal. For Warren Buffett, it’s easy.

Also, Warren Buffet’s view on saving is pretty unique. Since he is such a fantastic investor, he could multiply the money he saves. So if he saved $100,000 by using a budget car, those savings will turn into a million dollars in a few years. You and I can’t say that with conviction. For regular people, the compounding factor is much lower. It’d take me 30+ years to turn $100,000 to a million dollars. For regular people, it is much simpler to spend now and work to make money later. Our investment compounds at a much slower rate.

Warren Buffett has a single-minded obsession with making money. He often said he wouldn’t be where he is if he didn’t win the ovarian lottery, but I disagree. If he was born in India to a middle-class family, his passion for making money would still make him successful.

His teenage years and early 20s were fascinating. He sold gum, delivered the paper, started a golf ball reselling business, set up pinball machines in barber shops, and had a tenant farmer working for him. He was making more money from delivering newspapers than his high school teachers. His paper route was quite lucrative and he had to hustle his way into it. Warren Buffett was a serial entrepreneur and he saved up $5,000 by the time he was 17. That’s more than many people have in the bank today and that’s not even counting inflation. His stash would be worth about $55,000 today. Anyone hustled and saved up that much when they were 17?

This was my favorite part of the book. It shows me that Warren Buffett would have been successful no matter where he was born. He is a hustler and he is good at building businesses.

Talent for valuing a business

Warren Buffett’s greatest talent is the ability to value a business and swoop in at the right moment. He can analyze the numbers and see if it makes sense to invest in a business or not. Of course, he wasn’t always right, but his scorecard is much better than anybody else. This talent might not have been useful a thousand years ago, but it was perfect timing for Warren Buffett. In the 60s and 70s, many companies were mispriced and he was able to capitalize on them at the beginning of his career. He has passion for making money and the talent. That’s an unbeatable combination.

Warren Buffett has a knack for attracting successful friends and mentors. He read The Intelligent Investor when he was 19 and later enrolled at Columbia to learn from Benjamin Graham, the father of value investing. Warren Buffett made a big impression on Graham and eventually went to work for Graham’s investment company. Buffett chose the right mentor and it paid off.

In Snowball, I learned Buffett made a lasting impression on many successful people throughout his life. When he was 20, he wrangled a meeting with the CEO of Geico, Lorimer Davidson. Mr. Davidson was going to give him 5 minutes, but spent 4 hours talking to Buffett about the insurance business. That’s amazing.

Since then, Buffett made many more successful friends. Bill Gates, Charles Munger, Don Keough (Coca-Cola), Katherine Graham (Washington Post), and more. When he meets someone successful he is able to build a lasting relationship with them. His philosophy is to hang out with people better than him and their friendships elevated him.

Bill Gates, Sr. asked Warren Buffett and Bill Gates what’s their secret to success and they both answered, “Focus.” Buffett’s passion is to make money and he focused 100% on that. He isn’t distracted by family, spending money, having fun, traveling, and all the other stuff regular people have in their lives. He delegated the responsibility of raising the kids to his wife and focused on what he’s best at – making money.

Most of us don’t have that kind of focus. We need to relax after a long day of work and goof off a bit. I like to travel, go out to eat, browse the internet, and spend time with my wife and kid. To become successful, you need to be able to shut these distractions out and focus on what you’re good at. Warren Buffett isn’t a well-rounded person, but he is the best at what he does.

Did you win the ovarian lottery?

It took me more than a week to finish The Snowball, but I enjoyed it tremendously. It showed me a different meaning of ovarian lottery. Winning the jackpot requires more than being a white male American. It’s much more complicated than that.

I wasn’t born in the United States, but I won the ovarian lottery, too. My parents were college educated and knew the US represented opportunities. They immigrated here when I was 12 and handed me the red Powerball. I also got lucky with a couple of other things as well. I’m pretty frugal and I was smart enough to complete the engineering program in college. These few winning numbers gave me the foundation to build on.

I know I’ll never be a billionaire, but I’m very happy with my $7 winnings and how far it got me.

What about you? Did you win the ovarian lottery? How many winning numbers did you get?

Other books I enjoyed.

Thinking in Bets: Making Smarter Decisions When You Don’t Have All the Facts by Annie Duke

37 thoughts on “Did You Win The Ovarian Lottery?”