What do you picture when you hear the phrase South Pacific Island? I imagine white sandy beaches with the surf rolling in AND a huge bill after the vacation. I think of all the famous tropical island destinations like Tahiti, Bora Bora, and Fiji. I just checked Expedia and a weeklong vacation with flight+hotel in Bora Bora starts at $2,700. How about the Cook Islands instead? It’s a bit off the beaten path for the US tourists, but it has great beaches, a beautiful blue lagoon (that surrounds Rarotonga), and mountain hiking trails. So is it possible to have a great time on a tropical island paradise on the cheap? Here is how I did it.

It’s tough to be cheap when the airplane ticket starts at around $1,000, but I managed to get to Cook Islands for a little less than that. I was on my way to New Zealand (another story) so I thought I would take the chance to fulfill my South Pacific Island dream and booked a stopover on Rarotonga, the main island of the Cook Islands. I don’t remember exactly how much extra I paid for the stopover, but I think it was about $300 extra in 2006.

If I was on a honeymoon, I might pick a beachfront room at the Rarotongan Beach Resort with the price of $380 per night, but I was traveling alone at the time and I was being cheap. I found Vera’s online and decided to try this hostel on Muri beach. Muri beach is the best beach on Rarotonga and it’s suitable for swimming and snorkeling. I paid NZ$20 a night for a room next to the beach! It was a hostel so I had 3 roommates, but that’s not a bad thing when you’re traveling by yourself. 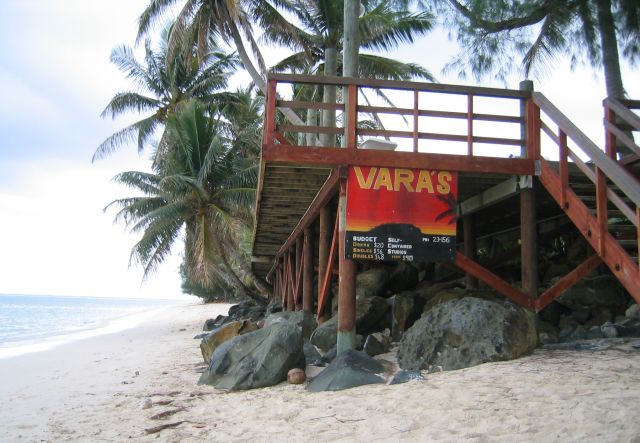 Food was a bit of a problem because there were only resorts and hotels in the Muri Beach area and the meals were quite expensive. Vera’s had a communal kitchen for the backpackers and I made simple sandwiches such as PBJ, marmite, and tomato. I was only there for 4 nights so I didn’t want to buy too many things. One night the backpackers pooled money and made a big pot of pasta for everyone. It’s common knowledge that backpackers prefer to spend money on smokes and beer than in a restaurant. 😀 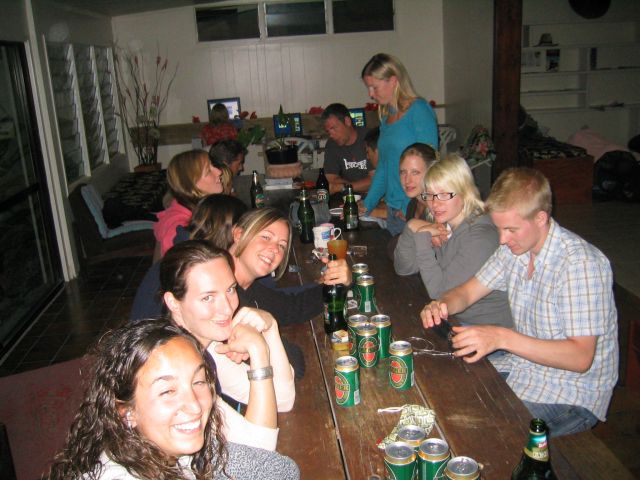 There is only one road that goes around Rarotonga and you can catch a bus. It was pretty simple. I rented a scooter one day and rode around the island to see other beaches and that was fun. I had to go to the DMV in Avarua, the capital city of the Cook Islands, and get a license so I could rent a scooter. It took half a day, but I used the time to explore Avarua a bit and purchased a lunch from a restaurant so the time wasn’t totally wasted. Local transportation costs were not a big part of the bill. 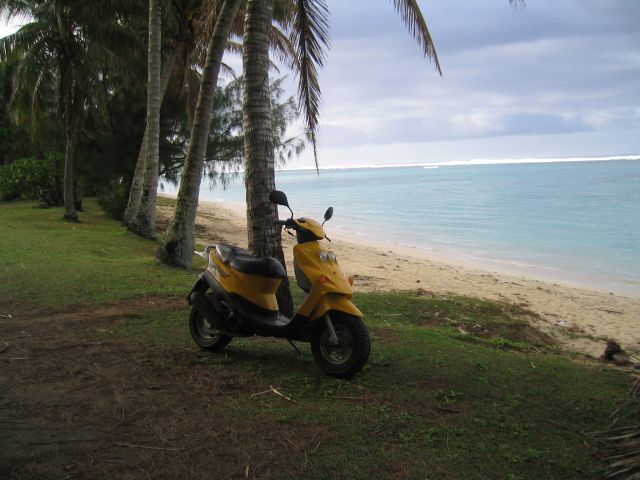 I spent $50 to go see a cultural show & buy a drink at a resort nearby and I think that was it. I went to a service at the Cook Island Christian Church with fellow backpackers and had a great time listening to hymns sung in Mauri. The church also fed us lunch afterward. 🙂 Other than that, I snorkeled, swam, hung out by the beach and just relaxed. I also had a great time meeting backpackers at Vera’s. There was only one other person from the US and the rest were mostly from Europe. Many of them were either starting or ending yearlong backpacking trips and it was fun seeing different perspectives other than the workaholic US view.

All in all, it was an enjoyable side trip that cost me less than $600 extra and I loved it. One day I will take the family there to spend more time exploring Rarotonga and the other islands in the chain. I would also love to hit Bora Bora someday. Now you know I like tropical beach vacation since my last travel post was Krabi. 8)