I hope everyone had a great Father’s Day. We spent the day on the road, on our way to California. This is our first long vacation since baby RB40 was born. We plan to take it slow and take a couple of days to get to the Bay Area. He doesn’t like sitting still for so long and we will have to stop pretty often to stretch our legs.

Eugene – We’re planning to meet up with friends for lunch. I like Eugene. University of Oregon is nearby and the town has a great laidback vibe. It’s only two hours away from Portland, but we rarely get down there. There is an annual fair that is a ton of fun near Eugene. The Oregon country fair is like a hippy renaissance fair. We went once and saw a bunch of musical acts, interesting people, and a lot of cool stuff to buy. (I didn’t buy anything 🙂 .) It’s an amazing time machine to the 60s. If you are in town on July 13-15, drop by and you won’t forget it. 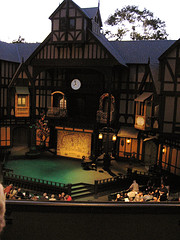 Ashland – Ashland is in southern Oregon and it’s the home of the Oregon Shakespeare festival. We stayed at a B&B in town once and saw a show at the Elizabethan theater. I love this theater because it’s open air and had a great atmosphere. We got a standing ticket and I had a pint of beer while watching the show.  The theater is supposedly modeled after the Shakespeare’s Globe Theater in London and I like it a lot more than the usual indoor theater. This time we’ll stay at a Red Lion Hotel nearby.

Shasta – Will probably take a short pit stop over the Shasta pass. The view is really nice, but I don’t really know if there are any baby friendly places to visit here. Someday we’ll drop by the Shasta Caves.

After that we’ll push through to San Jose.

Have you driven from the Pacific Northwest to Northern California? Where are some other nice places to stop along I5? When we drove in the past, we always just blast through in one day and didn’t stop anywhere. We’ll take the coastal route on the way back.