Previous post: Focus on Your Saving Rate When the Market Fluctuates

My Biggest Splurge Before FIRE 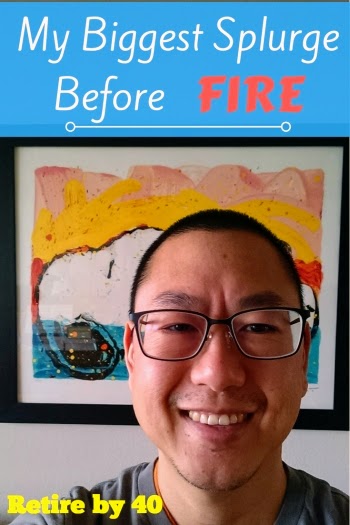 Last week, I picked up my new glasses and posted a picture on social media. A few sharp eyed readers commented that they loved the background. I replied it was a splurge before I discovered FIRE (Financial Independence Retire Early.) Do you recognize the picture? It is Mrs. RB40’s favorite cartoon canine – Snoopy. The artwork is a limited edition, hand pulled, signed lithograph by Tom Everhart and is part of a set of three lithographs. He’s the only artist authorized by Charles Schultz to reproduce characters from the Peanuts comic. We love the artwork, but they were very expensive when we purchased them. Guess how much they cost and write it down. Don’t cheat and look it up on the internet yet. I’ll reveal the price a little later.

Here is the full set.

Before I discovered FIRE

We purchased these lithographs in 2005. Both of us were doing very well at our full time jobs back then. I was 31 and felt invincible. I made good money, had a beautiful wife, lived in a brand new house, took international vacations, and drove a BMW convertible. Life was damn good. Even at that level of spending, we lived below our means. The cost of living was very reasonable in Oregon back then. We still had extra money left after we paid the bills, maxed out our retirement plans, and invested in a few stocks. I thought we could continue living the American dream until we’re old. Alas, that was the hubris of youth.

At the time, my engineering career was on a good trajectory. I worked hard and got regular promotions. The technical work was fun. I spent a lot of time at work, but that was normal. Most young engineers worked 50-60 hours per week with no overtime pay. Once I got more senior, the job wasn’t as enjoyable anymore. The company wanted me to take on more leadership role and I’m not good at that kind of thing. I was at the peak of my career in 2005. It was a gradual slide after that. Eventually, the job wasn’t the right fit for me anymore and I retired early from my engineering career.

Anyway, I was full of confidence in 2005. That year, we visited New Orleans with friends and had a great time. The food was awesome. We particularly enjoyed the oysters, beignets, and huge po-boy sandwiches. I’m not a big art fan, but we were on vacation so we walked through a few galleries near the French Quarter. Mrs. RB40 spotted these Snoopy lithographs and she fell in love with them. She didn’t want to buy them because they cost a lot of money, but I wanted to get her something really nice. Previously, I didn’t spend much money on gifts. We got married in 1999 at the county courthouse. I didn’t even get her an expensive diamond ring. She only had the $300 ring I gave her before she went off to Peace Corps in 1996. I was poor back then and it was all I could afford, but that’s another story.

I knew she loved Snoopy so I thought these would be the perfect gift to show my appreciation. The price was very expensive at $5,000 for the set, but what the heck. We were doing well financially and five grand wouldn’t break the bank. This was our biggest splurge before I discovered FIRE. We had a nice house and a sports car, but a place to live and transportation were necessities. This was a complete splurge because we didn’t need expensive artwork on the walls, though an interior designer might disagree. Luckily, I learned about FIRE a few years after this and we didn’t splurge on other high priced items.

So that’s how these Snoopy lithographs came into our home. How did you do on the price guessing? Close?

Did I regret buying these artworks? Somewhat. I didn’t know anything about art and I shouldn’t have made an impulse purchase like that. Now I know to wait a few days before buying anything. That’s one of the best frugal hacks anyone can do. If I had waited a few days, I probably would not have purchased these lithographs.

They made 500 of these lithograph prints in this edition and destroyed the plates. Unfortunately, I think 500 is too many. After 13 years, there are still many of these artworks in the shops. I did some research on the internet and it looks like the price is around $1,400 each from galleries.

They are a bit cheaper on the secondary market. I’ve seen one for as low as $1,100. We might have an edge because we have a set with the same numbers (#172/500.) The set probably could go for $4,500. Who knows? These are the only household items I have on my net worth spreadsheet.

On the other hand, we have been enjoying these artworks for 13 years. Mrs. RB40 still loves them so in that regard, they have been good. Most of other the household items we purchased in 2005 are in the landfill by now.

“You better not be thinking of selling my Snoopies!” – Mrs. RB40 as I was taking pictures for this post.

Fortunately, I learned about FIRE soon after this big splurge. Now, I avoid big ticket purchases and focus on investing. Having a financial goal really helps in that regard. I think most people spend aimlessly because they don’t have a solid financial goal.

Mrs. RB40 says this wasn’t an aimless purchase — it isn’t like we bought a ton of other lithos.

What about art as investments? I wouldn’t do it if you don’t know much about the art world. For $5,000, I learned that Lithographs are not good investment. That’s an expensive lesson. At least that was the only big splurge we had when we were young.

What was your biggest splurge? Have you purchased art before?

PS. The lithograph process is very neat. You can see how it’s done on YouTube.