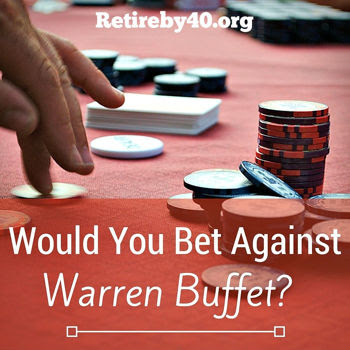 Would you bet against Warren Buffet? At the 2006 Berkshire Hathaway annual meeting, Warren Buffet offered to bet $1 million that hedge funds couldn’t outperform the simple S&P index fund over a 10 year period. A few guys from the hedge fund world heard about this and they figured Buffet was wrong. They’d bet on hedge funds and the million dollar bet was born. Here are the terms on Long Bet.

“Over a ten-year period commencing on January 1, 2008, and ending on December 31, 2017, the S&P 500 will outperform a portfolio of funds of hedge funds, when performance is measured on a basis net of fees, costs and expenses.”

Let’s do a quick comparison. If you invest a million dollars and gain 10%, how much fees would you pay in one year?

Yowza! The big fee is a HUGE drag on your portfolio. The hedge funds would have to outperform the S&P 500 fund by at least 50% every year to win this bet.

On the other side is Protégé Partners, a hedge fund based in New York. They picked a basket of 5 undisclosed hedge funds. I don’t know much about hedge funds so I did a little research for this article. According to Investopedia, hedge funds are alternative investments that use a number of different strategies in order to earn active returns (alpha as they call it in the business.) You can read about the different strategies hedge funds use to beat the market at Investopedia. They can buy undervalued stocks, short overvalued stocks, get a discount on distressed securities, quantitative trading, invest in emerging markets, or whatever they want. Basically, hedge funds aim to generate gains in any market condition and reduce the risk to the investors.

Hedge fund managers are a collection of the most brilliant people ever produced. They have cutting edge technologies, the latest market information, and they are completely focused on making money. They know a lot more than regular investors so they should be able to beat the index fund handily, right?

The Result So Far

Apparently not. Hedge funds have had a string of bad years recently. There is less than 2 years left on the bet and Warren Buffet’s choice is way ahead. At the end of 2015, VFIAX is up 66% against 22%, for the hedge funds. The US stock market had been on a tear over the last 7 years and it was hard to beat the S&P 500 index funds. The lead looks insurmountable at this point, but you never know how the market will act. If we see a severe market crash, the hedge funds might make a comeback.

So does that mean the hedge funds can’t beat the simple index funds? Not necessarily. The real winner of this bet would be the recipient of the $1 million donation (Buffet’s choice is Girls Inc. of Omaha). Each side put up $320,000 in a zero-coupon Treasury bond that will be worth $1 million at the end of 2018. However, at the end of 2012, the bond had risen over 50% to $950,000. They decided to cash in the bond and invest the proceeds in Berkshire Hathaway stock for the rest of the time. The pot has grown to $1.68 million by the end of 2014 and this has handily beaten the S&P 500 funds. See, it is possible to beat the market.

The best hedge funds are much better than the average hedge funds and they have beaten the market handily. Jim Simons’ Medallion Fund averaged 35% annual gain (after fee) since they started in 1993. George Soros’ Quantum fund generated an average annual return of over 30% while he was at the helm. Clearly, some hedge fund managers are worth the price they charge.

Would you bet against Warren Buffet?

The conclusion is some hedge funds really can beat the market over the long haul. However, the regular investors don’t have access to those top hedge funds. All the best performing hedge funds are closed and do not accept any new money. The rest of the classes can’t beat the market consistently and you’ll pay through the nose to invest in them. The next George Soros might head a small hedge fund in your city, but how can you pick him out?

For individual investors like you and me, it’s probably best to stick with the simple low cost index funds. That’s what we’re doing with our retirement accounts. If you can invest in one of the top hedge funds, then I’d say go for it. I wouldn’t bet on Protégé funds, though.

Do you invest in hedge funds? How did you do over the last few years?

Here is a great podcast at NPR’s Planet Money about this – Brilliant vs Boring.

31 thoughts on “Would You Bet Against Warren Buffet?”