The following is a guest post from Mrs. RB40, our chief editor.

My stomach fluttered with excitement and relief as I sold shares of my past employer’s stock. When I worked there, I had participated in the employee stock purchase plan, which allowed employees to purchase stock at a discount.  The sale would fund my master’s degree, and if I had held onto it at that moment in the technology sector (2005), the stock price would surely decrease.

A few years later, I related this to my friend (who still worked at the company), and he looked at me with utter incredulity.  “Well, I hope you sold just after the recent spike!”  My first reaction was one of visceral disappointment in myself in that I could have made more money had I held onto my stock.  Then I thought, wait a minute…even if the value went up, I could have paid for my education a different way (i.e. loans), or put off the process until later.  I also could have been beset by inertia with the accompanying lack of motivation (or money) to complete my degree. The increased value of the stock could have paid for the increased value of tuition…so everything could have evened out anyway. There seemed to be a lot of coulds. Just because my friend was able to take advantage of the price spike, I realized that I made the right decision for me at the time, and that I should not waste my time dwelling on someone else’s gain or what could have been.

<Joe> Her company’s stock was a wild ride and the company was taken over in 2007. I think it was a great decision to sell when she did.

I don’t always make the right decision for myself. Sometimes, I spend a little too much time wondering where to invest, or why I feel like I don’t have enough money.  My behavior isn’t uncommon. Too often, we spend so much time focusing on finding the perfect money-making tools or lamenting our lack of funds, rather the focusing on who makes the financial decisions (read:  ourselves). Carl Richards, a certified financial planner, identifies the difference between what people should do and what we actually do. He calls this phenomenon The Behavior Gap, and expounds upon this in his book The Behavior Gap: Simple Ways to Stop Doing Dumb Things with Money

.  Richards maintains that while people may blame the economy or financial markets for dismal or favorable outcomes, it all comes down to the decisions that we make.

It all sounds so simple, doesn’t it? In an age where having a choice is often demanded, actually making decisions often paralyzes us, especially when it comes to our finances. When our judgment clouds because we give in to our emotional responses (i.e. fear, greed, or otherwise), we often make decisions that turn out not in our best interests. In fact, I almost didn’t sell my stock because I was afraid that I might fail in my new adventure as a grad student after being in the work force for ten years.  Silly, huh?

With wonderfully simple cocktail napkin drawings, Richards explores how someone can rethink their natural tendencies to do the opposite of what they should do to gain peace of mind and money. The following key themes appear throughout the book: 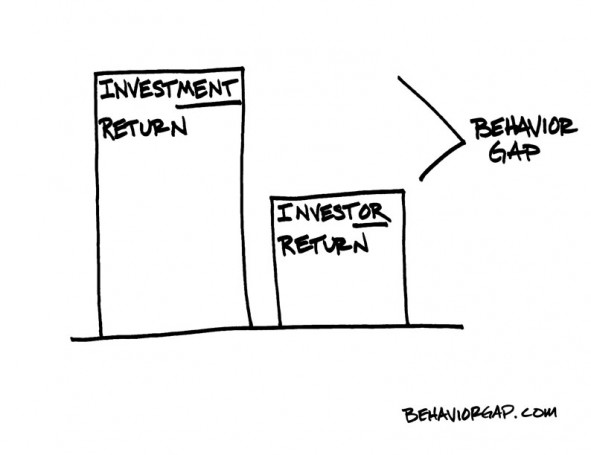 1) Simple doesn’t mean that it is easy.

There are no real simple secrets to financial wealth. The non-headline grabbing habits of spending less than you earn, setting money aside for a rainy day, paying down debt, and steering clear of large losses.  According to Richards, we often resist the simple solutions because they require us to change our behavior.  And anyone who has tried to change behavior and stick with it (New Year’s resolutions, anyone?) knows that this process is not easy. Richards provides some insightful tips on reframing how we see our finances, in an effort for us to make those small changes that are clearly within our control.

2) It is better to be informed than to be anxious about too much information.

Watching the news can lead to people making a financial decision based on an emotion (i.e. fear, excitement, the exclusivity of being in the know).  Richards points out a particularly amusing behavior trait he calls the Economist smirk. The description of the smirk struck me, since I pick up the Economist every so often. The point is your news source is not your financial advisor. Just because an article touts a great thing, doesn’t mean that you should follow the crowd because everyone else is.  What we should be doing is making smart decisions regarding money so we can build our own wealth over time based on what we need, not reacting hastily based on exclamations in the media.  Our definition of wealth is personal, so how much we are building should matter individually and not on how someone else is doing. Use personal experiences to learn from our mistakes and move on, rather than bemoan what we could have done, which leads me to the final point.

3) Spend your time focusing on what really matters to you so you can remember to live.

This is where the phrase ‘personal finance’ emphasizes the personal.  A lot of people talk about having a perfect plan, and then obsess over every detail.  Richards feels that while planning is important, it should not be your be all end all. Sometimes things just may not turn out exactly as planned. It is great to plan for the future, but you also have to live in the present.

We may try to predict how the financial markets will do, but the reality is…we really have no way of knowing. The only thing we really can control is our own behavior.  Therefore, our behavior is the deciding factor in financial success and our personal happiness.  As Richards says, “You’re not in control even when you are making wise decisions. So beware of making decisions for purely financial reasons.  Instead, make decisions that square with your notions of virtue, wisdom, and common sense.  You’re responsible for your own behavior, but you can’t control the results.”  So relax.  Instead of focusing on everything else (i.e. the news, the market, what everyone else thinks), look at what is important to you, and decide accordingly.  What I chose to do back in 2005 mattered to me, got me where I needed to go, and I was (and still am) quite happy with the decision I made.

<Joe> I really like this book as well and I think many investors can benefit from reading it. See if your local library has a copy and have fun.

Latest posts by MrsRB40 (see all)