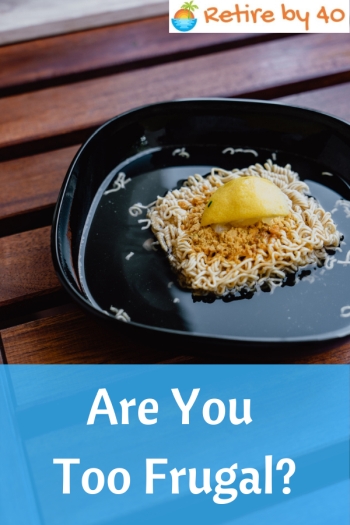 Frugality is a wonderful thing. Being frugal will help you build wealth faster because you can save and invest more. It is the short cut to financial independence. The less you spend, the earlier you can FIRE! After all, the starting point is 25x your annual expense. That’s a lot easier to achieve with smaller annual spending. That’s how A Purple Life retired early at 30 with $500,000 invested. Her annual expense is quite low so she doesn’t have to work until she’s 65 like most people. There is a downside, though. Frugality is a hard habit to break. When I was young and poor, I was very frugal and the habit stuck. Now that we are comfortable financially, I’m still pretty frugal. Are we taking frugality too far? Why not spend more now that we’re doing better?

First off, let’s make a distinction between being frugal and being cheap. To me, being cheap means saving money at all costs. For example, under tipping is being cheap. Eating fast food without fruits and veggies can save money, but it isn’t very healthy. On the other hand, frugality means you look at the overall value. So asking for water instead of paying $3 for a soft drink is being frugal.  It’s a fine line.

Is it possible to be too frugal? I think so. Let’s look at Warren Buffett for example. He’s one of the richest people in the world, but he doesn’t spend much. He still lives in a modest home he purchased in 1958 for $31,500. His day starts off with a breakfast sandwich from McDonald’s. He also drives the same car he’s had for years, a 2014 Cadillac XTS. That’s a nice car, but not extravagant. Lots of struggling middle-class families have more expensive vehicles than that. Anyway, I think Warren Buffett is too frugal. He should spend much more because he’s super-rich. Somebody has to stimulate the economy, right? We’ll see if he’s too frugal a bit later.

Warren Buffett is a fascinating person. I highly recommend The Snowball: Warren Buffett and the Business of Life. It’s a good read.

Being too frugal isn’t a problem for most people. Regular folks tend to spend too much, not the other way around. Here is one way to objectively look at it. Let’s take personal spending as a percentage of your net worth. This way, it’s all about the numbers and not emotion.

Here is my proposal. First, figure out your burn rate.

What? You don’t know your annual spending or net worth? Let’s remedy that right now. Your net worth is simply all your assets minus your liabilities (debt). Annual spending is a bit more difficult. You have to track it and tally it up. You can estimate it if you don’t know it down to the penny. These 2 numbers are important if you want to FIRE. Tracking your expenses is actually very helpful. You don’t know where your hard-earned money goes if you don’t track it.

*Here is an easy way to check your net worth – sign up for a free account with Personal Capital. You can aggregate all your accounts there and your net worth will be updated automatically. It’s very convenient.

Now that you’ve got your Burn Rate, let’s see if you’re too frugal or not.

Is the RB40 household too frugal?

Last year, we spent about $85,000 (including taxes, insurance, and various deductions). That’s in the highly frugal range, 2-4%. That’s not bad at all. It’s where I like to be while we are still young. Once we’re near normal retirement age, we’ll probably loosen up a bit and spend more. This is all going according to my withdrawal strategy.

Okay, let’s look at Warren Buffett again. Actually, he spent a lot of money last year. He donated $3.6 billion to five charities in 2019! Wow, that’s very generous. Warren Buffett was worth about $80 billion then. So he was in the 4-5% range, FIRE frugal. He’s doing just fine. Whew, I hope you didn’t think I was going to badmouth Warren Buffett. He’s one of the good guys. (I assume his personal spending and income taxes are much less than $3.6 billion so they wouldn’t affect the calculation that much.)

What do you think of my table? Where do you place on it? Are you too frugal or not enough?

Sign up for a free account with Personal Capital to help track your expenses and net worth. They also have several nice tools to help plan your retirement. Check them out!