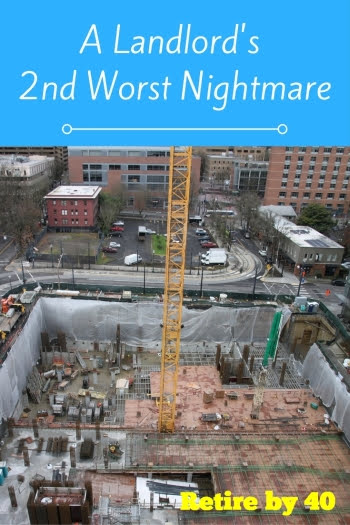 Without a doubt, the worst nightmare for a landlord is having horrible tenants. Fortunately, our tenants over the last 10 years were mostly trouble-free. However, we are going through the landlord’s second worst nightmare right now. Running a distant second is having an extended vacancy. Ugh! When the unit is not rented, it is taking money out of my pocket. Our one bedroom condo has been vacant since November. That was unexpected because this unit has been occupied almost 100% since we got it in 2011. I guess the Portland rental market is softening a bit. However, there are some solid reasons why we’re having more trouble this time around.

We also put the unit up for sale. We’ll go with whatever works out first – renting or selling. Either option would be fine with me. Renting for a few years would be fine. Ideally, we’d sell the unit after Mrs. RB40 retires so we can minimize taxes.

I made a huge mistake when the unit first became vacant. I met a prospective renter who was keen on moving in. He used to live in the building and he was familiar with it. However, he planned to stay for only 6 months. He was on some kind of work contract. I prefer a long term tenant so I turned him down. That was a bad move because nothing has panned out since then. One big reason is the rental market is very slow in the winter. Nobody wants to move around Thanksgiving and Christmas. People seem to be more interested in moving in the spring. I’ve got a couple of good prospect who wants to move in March.

If I knew that it would be so hard to find a new tenant, I’d have rented it to him and then turn the unit over again in six months. Lesson learned. A bird in hand is worth two in the bush.

There is one big issue with the unit. A huge building is under construction next door. We can see the crane right outside our windows. I don’t think the construction noise is that bad. Our windows are pretty new and the unit is very well insulated. The construction workers are on site from 7:30 am to 5 pm on weekdays so there should be minimal disturbance during off hours. If you work regular hours, the construction wouldn’t be a big deal.

However, most prospective tenants I met had a huge problem with the construction site. One guy worked off hours and he needed to sleep during the day. A few people worked from home and thought it would be too noisy. Students are afraid the construction will disturb their studying. One couple has a non working wife and she vetoed our unit. Most prospects do not work regular hours. I guess that’s Portland for you. 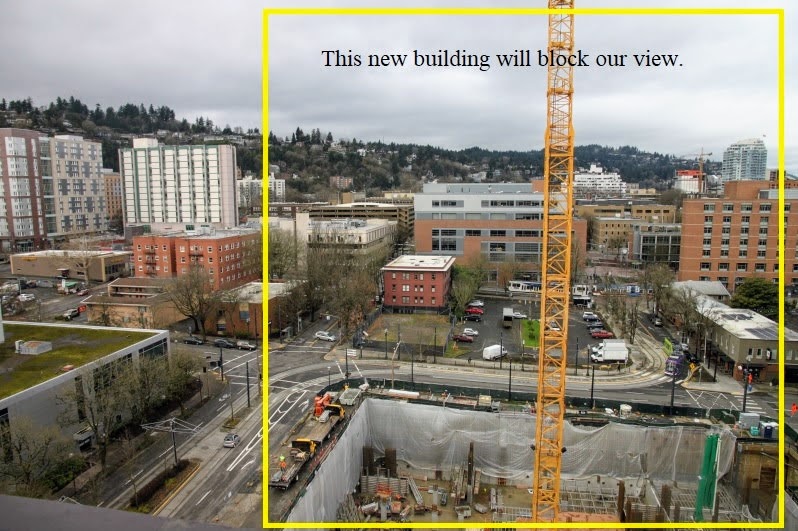 Another problem is the new building will block a lot of our great view. This isn’t a deal breaker for the renters, but prospective buyers just shut down as soon as they see the construction. In reality, the new construction should increase the housing price for the whole neighborhood. The new units will be smaller and more expensive. Our unit should benefit from the higher price and new neighborhood stores. Losing the view sucks, though.

The new building next door is a long term issue, but we also have another big short term issue. In the last six months, we’ve had a lot of security issues in this building. The number of property crimes shot up significantly over a short time period. This is puzzling because we live in an identical building next door and our building hasn’t seen the same issue. Eventually we found out why there were so many problems over there. I’ll share some sad pictures first.

Our building is in downtown Portland and there are a lot of homeless people in the area. Not all homeless people are bad, but some are drug addicts and they need to feed the habit anyway they can. 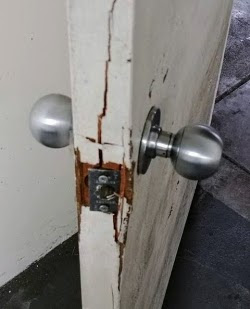 Somebody kicked in the door to the bike storage area and stole some bikes. 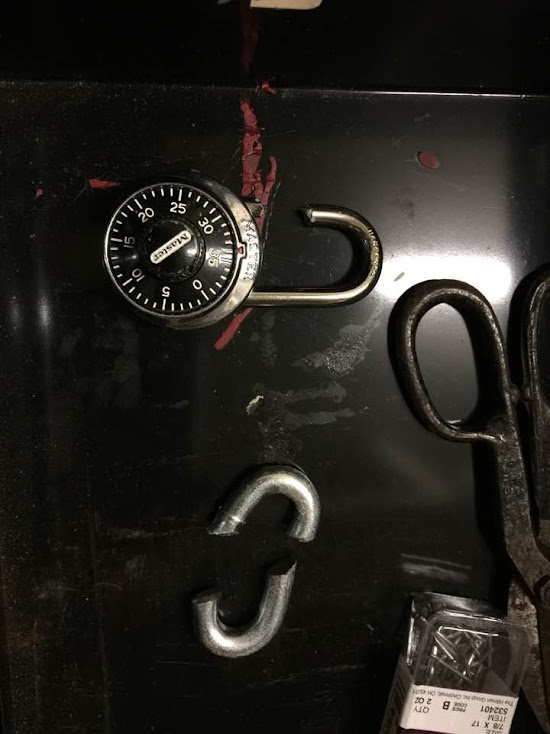 Homeowners have storage areas in the basement and they have been broken into a few times as well. 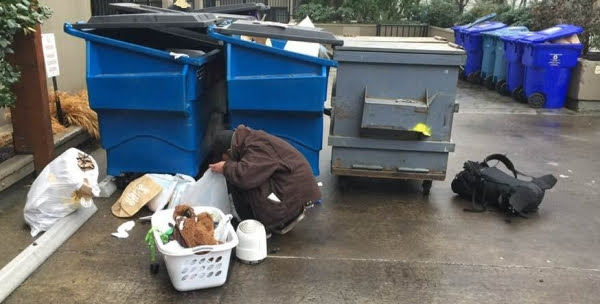 Here is a suspicious character going through our trash bins. Residents reported many scruffy people coming into the building with boxes and leaving after meeting someone in a certain unit. Residents suspected that these “customers” are trading stolen products for drugs. 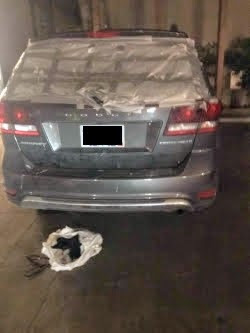 Here is a suspicious car in the visitor parking spot. This person pulled out 10 bags of clothes and was going to do laundry in our machines. A resident asked if she lived in the building and called our security service. 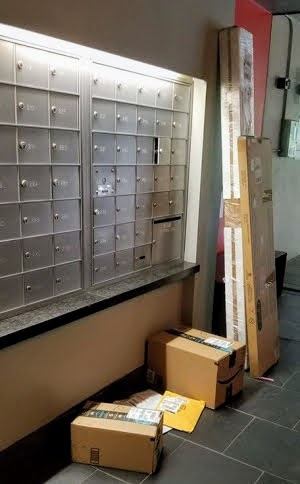 We put up a sign directing delivery people to drop items off in front of the respective units or into our designated package drop-off area. However, many of them just ignore the “no drop off” sign in the lobby. Many items are left next to the mail boxes in full view of the street. I’ve even seen some boxes left outside the front door. This is an invitation for thieves.

Eventually, I found out from the residents that there are a few units that are probably causing 90% of these problems. One guy sells drugs and probably trades them for stolen property. Another guy let homeless people into the building to hang out in his unit. The mom owns the unit, but she lives in Brazil. She told us the son has a history of drug problems. Residents suspect that the son lets homeless people sleep in his unit to trade for drugs.

The people in these units steal clothes from the laundry room and cause all sorts of problems in the building. There are cameras in the laundry room and it caught the perpetrators multiple times. The victims called the police and confronted those people, but they know just what to say. They claimed they “made a mistake” and gave the clothes back. The police took the report and that was it. The victims are feeling powerless because the bad guys are getting away with terrible behavior. 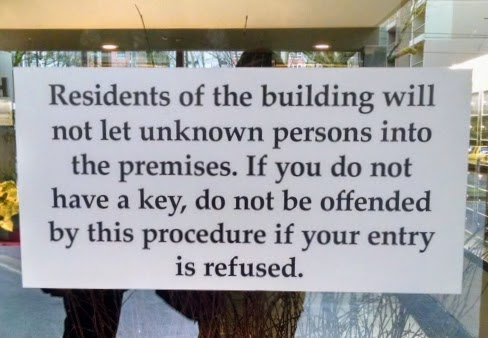 The neighbors are banding together to take steps on improving security in the building.

These steps cost money and our HOA fee will increase for sure. Anyway, things seem to be turning a corner here. There haven’t been as many property crimes over the last month and it should go back to normal soon. Every resident needs to be vigilant to help improve security.

Anyway, I hope I didn’t scare anyone away from being a landlord. This unit was a trouble free rental for 7 years. That’s the problem with being a property owner. Even a good neighborhood can change over time. It really sucks that just a few bad characters can screw up the whole environment. At this point, I’m kind of hoping someone would buy the unit so I can increase my investment in real estate crowdfunding. The Portland real estate market is getting overpriced and I want to diversify my real estate investment. I’m sure the professionals can do a better job than I can. This would make my real estate investment a lot more passive than being a landlord.

If you want to invest in real estate, but don’t want to be a landlord, check out RealtyShares. You can generate good passive income by investing in real estate projects like apartments, offices, restaurants, and single family homes. It’s quite interesting to see what’s available.

Disclosure: We may receive a referral fee if you sign up with a service through the links on this page.