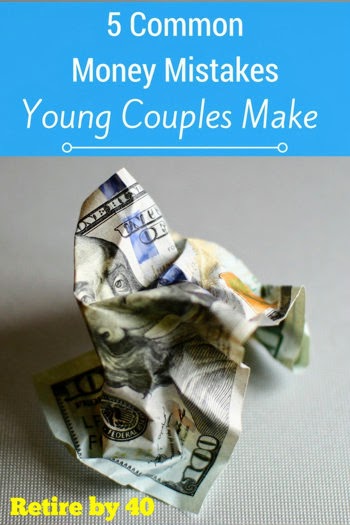 Do you and your partner bicker about money? According to a survey from Money magazine, arguments about financial matters are the leading cause of friction between spouses. Of the couples surveyed, 70% argue about money – that’s a lot of arguments. Fortunately, things get better as you age because older couples tend to argue about money less than the younger folks. That’s probably because most of us become more financially secure as we age.

I feel very fortunate because my wife and I never fought about money in our 18 years of marriage. We met in college when we were both poor students and have been together ever since. Back then, we didn’t have to fight about money because neither of us had any. We were both frugal by necessity, and the habit stuck. Money isn’t a big problem for us because we have similar money values and financial goals.

Since so many couples reach a point of friction because of money, I thought I’d share some insight into money mistakes young couples can avoid to reduce discrepancies and protect each other financially

1. Spending too much on an extravagant wedding

The wedding industry has become a huge business here in the US. The average American wedding costs over $30,000. If you’ve ever planned a wedding, you’d know that it can snowball very quickly in an effort to meet unreasonable expectations. I love a great wedding party as much as anyone, but most young people don’t have $30,000 lying around. I don’t think we even had $10,000 in the bank when we got married.

Today, young couples have it tougher than 20 years ago. Weddings have become a huge expense, and many couples are struggling to pay off student debt. The average Class of 2015 graduate has over $37,000 in student loan debt. Take those combined student loan debts, add a wedding, and a young couple could potentially start their married life with $100,000 in debt. That’s a huge hole to climb out of. Of course, if you are debt free and have high paying jobs, then go for it if that’s your prerogative.

Soon-to-be-wed couples need to go over their finances before considering an extravagant wedding. We didn’t have a big wedding, but money wasn’t the primary consideration. We started to plan for the wedding, and it was just too much work. Mrs. RB40 was turned off by the planning process and unsolicited input from family members, so we just went to the courthouse with a couple of friends. It worked out quite well, though. We used the money we saved to help buy a house the following year. Instead of a big wedding, we’ll have a big 20th anniversary party and invite all our friends. Personally, I think being married for 20 years is a much bigger accomplishment than getting married.

It’s not always easy to be completely honest about your financial situation. How do you tell someone that you have $10,000 in credit card debt and $37,000 in student loans? I imagine that would be a very uncomfortable conversation. However, these secrets will come out when a couple applies for a mortgage or a car loan. It’s better to be honest and reveal your imperfections before you get married.

Another common deception is keeping a secret stash. There might be a legitimate reason for keeping a secret bank account, but it is an indication of a bigger issue. My mom had a secret stash because my dad liked to gamble when he was young. It was perfectly reasonable to have money stashed away, but the underlying problem was still there. A secret bank account will just create more problems for a troubled marriage.

A better alternative is to have separate accounts – mine, yours and our account. That way, there is a limit to the spending, and it won’t impact the joint finances. Keeping separate accounts is more complicated, but it’s better than having a secret that can break up a marriage. These days, it’s perfectly acceptable to not combine your finances.

It’s just a bad idea to keep secrets from your spouse. You need to work as a team and figure out how to solve your money problems together. That’s why it is important to go over your finances together regularly.

Lifestyle inflation is a huge problem that is almost impossible to avoid. Most of us were poor college students at one time. Life wasn’t perfect, but I bet it was a lot of fun. The transition from having no money to making a decent income is a great one for most people. However, that’s when lifestyle inflation can make the biggest impact to your future.

A lot of people spend all their income to improve their lifestyle and borrow even more to enjoy life to the fullest. Young couples are even more susceptible to lifestyle inflation because they want to start off on the right foot. We had this exact problem when we first got married. The bank was happy to give us 2 car loans and a big mortgage. Our first house was way too big for 2 people, but we thought a big house would encourage our family members to visit.  We also thought it was the way to start a family. Of course, we didn’t have a kid until 14 years later so the big house just meant years of bigger utility bills, property taxes, and maintenance. It would have been a better idea to purchase a smaller home when we started out.

Young couples should minimize lifestyle inflation as much as possible because it is much harder to cut back once you’re used to a lifestyle. Living modestly will give you a chance to save and invest more in your 20s and early 30s. This is the best time to invest and compound interest will work in your favor for many years to come. So young couples, I advise you to live in a smaller home, avoid new luxury cars, use your old TV until it breaks, and generally spend less than you make.

Another common problem that young couples have is inadequate financial protections. Health and life insurance is expensive, but they are necessary when you’re married and even more so if you have children.

Health insurance is crucial because anyone may need health care suddenly. Medical bills are the number one cause of bankruptcy in the United State because nobody can afford to pay those huge hospital expenses. One special case a young couple has to watch out for is a pregnancy. The delivery, prenatal, and postnatal care can cost a lot of money – anywhere from $3,296 to $37,227 depending on the hospital. Even more if you have a cesarean section.

Life insurance is even more overlooked by young couples. The subject may be a bit depressing, because nobody wants to think about death, especially when they are young. Healthy young people think they have years to live, but you never know what’s going to happen tomorrow. And life insurance helps financially protect your family from the unexpected.

I had a small life insurance policy through work when I was in my 20s thinking it was enough. Now, I know it wasn’t the right coverage because a work situation can change rapidly, and employer-provided coverage only covers you while you’re at that job. It also typically provides coverage that’s only 1 or 2 times your annual salary – the usual recommendation when you have financial dependents is coverage that’s 5 to 10 times your annual salary.

Life insurance is extremely important if you have kids. When we had a kid, I made the extra effort to get a supplemental life insurance policy outside of work. I wanted to make sure our son is taken care of if something happens. Money doesn’t solve every problem, but it would help smooth out some bumps in the event of an untimely demise. Being a single parent is very difficult, and I wanted to make sure that money won’t be a huge concern for my family. And, coverage is far more affordable than you probably think. A 20-year, $500,000 policy would cost a healthy 30-year-old man about $21 per month.

Almost every couple needs health and life insurance. Unfortunately, young couples tend to overlook this and it could have disastrous consequences. Go over your coverage today because this is the perfect time of the year to review them. Life insurance is no longer optional when you have children.

5. Not saving for retirement

Unfortunately, we don’t save enough for retirement here in the United States. Young couples tend to ignore retirement savings because it seems so far off. There are a lot of other financial demands that need immediate attention. Many people put off retirement savings until their 40s and 50s, but that is a huge mistake.

Everyone needs to start saving for retirement as soon as they can. Compound interest works best when you invest early. In my 401(k) article, I show how early savings can give your 401(k) a huge boost. In my calculations in that post, just putting off 5 years of investing in your 401(k) from 1988 to 1993, you’d have $450,000 less in your retirement fund. That’s a huge amount.

This will hold true in the future as well. If you start working in 2017 and save the max contribution of $18,000, you still have the potential for growth towards your retirement. The best wealth building advice I can give is to invest in your 401(k) as soon as you can. Put off getting a nice car and a big house until you are able to max out your 401(k) comfortably. I promise that you won’t regret it.

Start off on the right foot

Mrs. RB40 and I are really lucky because we have similar money values, and we don’t mind living modestly. Many couples have more problems because they don’t share the same values. If one person wants to live it up and spend all their income while the other wants to save, the relationship wouldn’t turn out well. Some couples are able to work it out and get on the same track so don’t give up if you made some mistakes early on. The key is to work together as a team to become more financially secure.

What are your best financial tips for young couples? We all made mistakes when we were young, right? Good luck to all the young people out there!