Is 3 million dollars too much to shoot for? 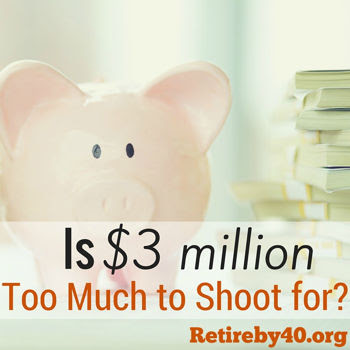 Last week, I wrote about the downside of living a frugal lifestyle – you’re out of step with American consumers and that’s not good if you want to be an entrepreneur. One reader brought up a very interesting point about living frugally. Here is Josh’s comment.

“There isn’t anything wrong with being frugal as long as you’re not continually denying something you desire just to save a buck. However, I have to ask all the frugal people out there, what’s the point of amassing such a large sum at middle to old age then? It’s hard to change one’s spending mindset, so unless you want to leave a huge sum to someone or just have an inexplicable need for a sense of financial security, what’s the point? Saving lots of money for old age while leading mostly a frugal life during young and middle age doesn’t make much sense to me. What would you do with several million dollars after 60 or 70? Go on a spending spree then? After mid to late 30s, time is way more precious than accumulating more money.”

Well… I am continually denying my desire. We try to live a frugal lifestyle, but it doesn’t mean I’m immune to desire. I want all kind of stuff. I can let my imagination run wild too.

I’m sure if you give me $100,000 and tell me I have to spend it in a week, it’d be gone in 3 days (a la Brewster’s Millions for the young’uns.) Everyone has to balance desire with financial responsibility. The things above are great, but they are not necessary. I’m pretty happy with our lifestyle and these things aren’t going to make me much happier in the long run.

As I mentioned in the previous frugal article, we lived frugally because the habit is ingrained. We didn’t have much money when we were growing up so now we put financial security ahead of consumerism.

Living frugally worked out very well for us because it enabled me to quit my engineering career. Currently, we spend about $50,000 per year. That’s probably at the high end of the frugal lifestyle actually. My old job paid relative well and we could have spent $120,000 per year and still have enough left to save and invest. We could afford all those things I listed above. However, if we lived that lifestyle, I wouldn’t have been able to retire early without a drastic cost of living reduction. I’d still be working in a cubicle instead of enjoying the blogger lifestyle. So living modestly paid off for us. Everyone has to find their own path though life.

What’s the point of amassing such large sum?

This one is a bit more difficult to answer. Actually, I don’t have a solid target. It would be nice to accumulate about 3 million dollars by the time we’re 60. That would make us feel wealthy and financially secure. We spend about $50,000 annually and that level of net worth should be able to support our lifestyle indefinitely. Is that too much to shoot for? Let’s go though some reasons why our goal is so high.

Inflation – Inflation is one big reason. The 3 million dollars goal will need to be inflation adjusted to about 5 million in 2035. Gas will probably cost $20 per gallon by then. If you’re not earning inflation adjusted income, it will be difficult to maintain the same standard of living. I think we will need a good size nest egg so we can reinvest a portion to offset the inflation.

Expense will go up – Recent retirees usually spend more money than when they are working. Our goal is to fully retire by 55 and we’ll travel the world for a few years. That will probably increase our yearly expenses for a while.

Healthcare – The cost of healthcare will also increase as we age. This is a tough one because everyone’s health is different. It’s good to have some money in case you need it, though.

Lengthy retirement – I don’t want to run out of money when I’m old. People live much longer these days and retirement could last 30+ years. It’s best to be financially prepared for that length of time. Life wouldn’t be much fun if you’re penniless at 75.

Financial security – Yes, we want that sense of financial security. Both of us lived through financial insecurity before and it was not fun. Life is much more stressful when you don’t have enough money to pay the bills.

Anyway, I don’t feel like we are sacrificing a lot to live a modest lifestyle. We’re pretty happy with our level of spending and we continue to save and invest for retirement. Hopefully, we’ll reach that 3 million dollars goal at some point, but we’ll be fine if we don’t get there.

Can frugal readers answer Josh’s question? Why are you trying to amass X million dollars if you’re living frugally?