Previous post: When did you learn about Financial Independence?

This article is by Kristi Muse, our writer. She is a freelance writer, blogger, police officer’s wife, and stay at home mom of two. 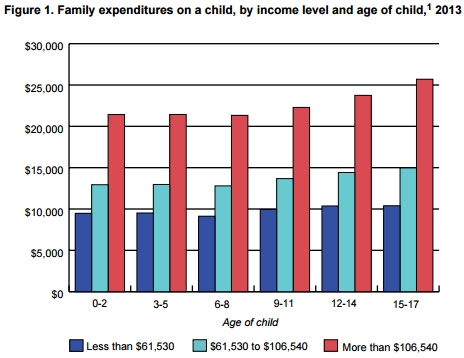 Every August, the United States Department of Agriculture publishes an annual report titled Expenditures on Children by Families. National data shows that the three main expenses contributing to the overall cost of raising a child are housing, food, and childcare/education. Last year’s data claims that middle income American families, who earn between $61,530 and $106,540 before taxes, will spend $245,340 to raise a child from birth to 17 years old. Let that sink in for just a minute. It costs just shy of a quarter million dollars to raise a child in middle income America.

The most fascinating part of the USDA’s report is that the total spent per child per year increases as the family’s income increases. Lower income families will spend a minimum of $9,130 per child, which is significantly less than $12,800 spent by the middle class and $21,330 spent by upper income families. The reason for the disparity, obviously, is that lower income families don’t have more than that to spend on their children. They can only afford the basics. They live in smaller houses, send their children to public school, and can’t afford expensive groceries.

I love this report because it gives American families a realistic bottom line amount. It provides a budget number that families could conceivably cut back to each year to raise their child. It also leads me to believe that any amount spent over the minimum $9,130 per year is spent by choice. I can already hear the naysayers shouting responses such as:

Feathers get easily ruffled when talking about finances and life choices. No one wants to hear that they aren’t necessarily managing their lives or their money in the best way possible. Here’s the thing…all of the above are valid concerns, but they are still choices. It’s a choice to pay more to live in a house with a better school district. It’s a choice to go to work every day and pay for childcare. It’s a choice to buy the food that you buy. There are always cheaper options and various ways to offset your cost of living.

It doesn’t have to cost a quarter million dollars to raise your kids. You could move into a smaller home with a lesser monthly rent or mortgage payment. You could quit your job, retire early, and work from home so as to not pay for childcare. You could homeschool instead of paying for private school. You could grow a garden, hunt for meat, plant fruit trees, or raise chickens for eggs to supplement the grocery bill. None of these choices are necessarily easy, and they may even seem like unattractive options to you, but they are still choices.

You don’t need to keep up with the Joneses as your income grows. Just because you can afford to spend $21,330 per year on your child doesn’t mean you should. You could live a more frugal lifestyle and save that extra $10,000 a year for their college fund instead. You don’t have to go into debt or spend your retirement money to raise your kids.

If your job makes you miserable, you hate paying for childcare when you never see your kids, and you loathe the mundane 9-5 of a corporate job, then quit.  Don’t be afraid to make completely life-altering choices that could allow you to spend less and save more. Take your life into your own hands and make new choices. Track your family’s child rearing expenses for a year to see if the number comes close to the national average. Take a good look at your life and see if there are decisions that you could make to spend less each year and invest the difference.

Do you think you could cut back to $9,130 per year or less to raise your child? Would you ever quit your job to live a more cost-effective lifestyle?