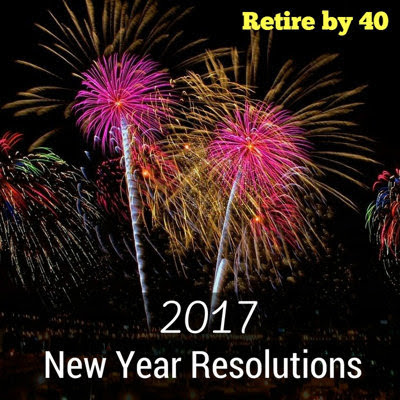 Happy New Year! Did you have a good 2016? We had a great year and now we’re ready to face 2017. Last year, I achieved 9 out of 11 goals and that was awesome. I was able to finish most of these goals because I had moderate expectations. That works better for me than “shooting for the moon.” I find that setting high expectations doesn’t work for me because I can’t achieve them and then I become discouraged. My style is to go at a slow and steady pace. Shooting for the moon is probably better for younger folks, though. Here is my approach on setting New Year Goals.

Okay, so that’s how I approach my New Year Goals. 2017 is going to be a tougher year because I have a lot of things I want to accomplish.

I’ve had this goal for a few years now and we have been able to accomplish it since I started tracking it. This is a baseline goal and we should not have any problem achieving it. I’m kind of attached to this goal because maxing out your 401k is the easiest way to become wealthy over time. Everyone should have this baseline goal. Here is how we plan to save over $50,000 in our tax-advantaged accounts in 2017.

Last year, we received $10,789 in dividend income and did not achieve this goal. I sold some stocks and haven’t reinvested the money yet. We have about $26,000 in the money market account and I’m looking for good dividend growth stocks to invest in. We should be able to achieve this goal if I put the money to work in a timely manner. I will also track our passive income better this year and post on how it is doing on a monthly basis.

If you want some dividend income, then follow this link – How to Start Investing in Dividend Stocks.

The ultimate goal is for our passive income to cover 100% of our living expenses, but that is going to take time. Our 2016 FI ratio is about 70% and this is going to be a tough goal. I’ll keep track of this in our monthly passive income post too.

I’ve been struggling to set good goals for our net worth. I don’t like shooting for, say 8%, because we’d never achieve that in a down year. Last year, I followed Sam’s (Financial Samurai) lead and set the goal to 3x risk free rate. That was pretty good, but this also had a similar problem as shooting for a flat percentage. You can’t do it if the stock market crashes.

For 2017, I’ll make it simple and try to beat the Vanguard Target Retirement 2040 Fund, VFORX. Their current allocation is about 88% stocks and 12% bonds at the end of 2016. I think this is a good measuring stick and we should be able to beat it. If we can’t consistently perform better than VFORX, then it’d be simpler to just put everything in that fund. I’ve been tracking our net worth since 2006 and it is very motivating to see the progress we’ve made.

RB40Jr’s 529 plan is with the Oregon College Saving Plan right now. It’s good because we get the deduction on our state tax, but I prefer Vanguard because they have low fees. This account has grown to about $55,000 and it’s time to minimize the fees.

I plan to move the account to Vanguard in Q1 and then start another account at Oregon College Saving Plan. That way we’ll still get the state tax deduction for new contributions. This is an easy one, but if I don’t put it here, I probably won’t get it done.

I’d like to move Mrs. RB40’s traditional and Roth IRAs to Vanguard so we can consolidate our accounts. Currently, the IRAs are at an online brokerage and she has to pay a transaction fee whenever she makes a contribution. The investments there are all in Vanguard funds so it’d be better to move it all to Vanguard so she can avoid the transaction fees. This is also an easy one and we’ll try to get it done in the first half of 2017.

Check out my tutorial – How to Start a Blog and Why You Should.

I haven’t changed Retire by 40 in a few years and it is starting to look dated. I’ll revamp the site in 2017 to make it more attractive and improve the loading speed.

Pinterest traffic is huge for some sites and we need to grab some of that. Last year, I hired a Pinterest manager for the first half of the year and she got us started. Unfortunately, she moved on to bigger and better things. I have been able to maintain the momentum and our Pinterest traffic is growing. For 2017, I’d like to boost it by 3x.

This isn’t going to be easy because we have about 1,000 sessions per month right now. My plan is to create better images here and spend at least 10 minutes on Pinterest everyday. Personally, I don’t think personal finance is a good fit for that platform, but it is working really well for some bloggers.

My second fitness goal is to do 15 pull ups in a row. Originally, I was going to shoot for 20, but that seems out of reach. In 2016, I could do 10 good pull ups before we left for Thailand in November. My workout has been a bit sporadic since then. I’ll get back to regular workout after RB40Jr goes back to school.

That’s it for fitness. I’d like to lose a few pounds too, but that’s not a big priority. My weight is stable and it doesn’t fluctuate much as long as I eat reasonably.

This goal was punted from 2016. Okay, I got an idea for a site this year. This is going to be a lot of work up front, but once it’s up, it shouldn’t take a huge amount of time. Stay tuned for this one. I’ll try to get it going by February.

Last year, I was on a panel at FinCon and it was a very good experience. However, I’m not a very good public speaker and I need to get better. Joining a local Toastmasters chapter seems to be the easiest way to get comfortable speaking to a group of people in a friendly environment. This is the toughest goal for me in 2017. I’m an introvert and I don’t like public speaking so I’ll need to push myself to accomplish this goal.

RB40Jr started kindergarten last year and it was rough in the beginning. He had a difficult time adjusting to the new environment and caused a lot of problems initially. Now that he’s more familiar with his teachers and classmates, he is doing very well. I wanted to sign him up for an after school activity, but decided to delay this until he adjusted to the kindergarten. I think I’ll sign him up for martial arts in the winter and then maybe soccer when the weather turns nicer.

Did you know that a total solar eclipse will pass through the US on August 21, 2017? A lot of Americans will be able to see this because it will pass right over the middle of the country. This one should be relatively easy for us because the eclipse will make landfall in Oregon! We’ll have almost 2 minutes of totality at Lincoln Beach. It will then pass over Oregon’s capital, Salem, and continue through 13 more states. In fact, I already reserved a camp site at the beach. Heh heh heh… Now, I just need to get some eclipse glasses and we’d be set. I’m really excited about this. I really hope it will be a clear day.

We went camping at the Crater Lake National Park last year and had a great time. I’d like to see more of our great national parks. Oregon has only one national park so this year we will head up north to Mt. Rainier or Olympic National Park in Washington. I need to get on the ball and reserve a campsite very soon, though.

16. Go on an international trip

Last year we had an amazing 3 week trip in Thailand and Cambodia. This year, I’m not sure where to go yet. It will probably be a shorter trip to Central or South America. We haven’t been to Cancun or Puerto Vallarta so there are some easy options.

Whew, that is a lot of stuff to do in 2017! I’d better make a chart and schedule them. It’s better to spread everything out so I can tackle them one at a time. 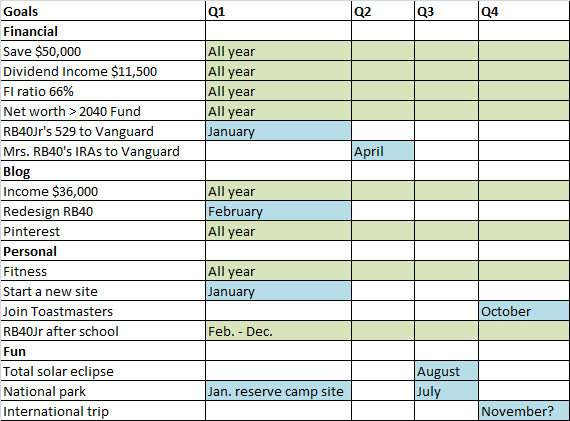 Alright! Now I have a plan. See, blogging is very useful. There are a lot of things to do in Q1, though. I’ll try my best, but some of these might get push out a bit. I’ll update my progress every month and you can see how much progress I’m making throughout the year. We’ll see how it goes.

Do you make New Year Resolutions? What are some of the things you’d like to accomplish in 2017?