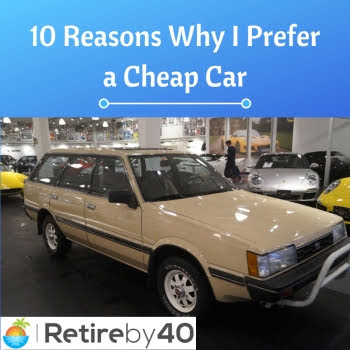 Recently, I heard on the radio that auto loans are at an all-time high in the US, over $1.2 trillion. The average price of a new car is also very high at $37,500, according to Kelley Blue Book. Whoa, that’s a lot of money. I guess I shouldn’t be surprised, but it is disappointing to see the lesson from the financial meltdown didn’t stick. You shouldn’t buy a car you can’t afford. Personally, I hate having a car payment and paid cash for the last vehicle we purchased in 2010.

The average price of a new car is pretty shocking to me because we haven’t shopped for a car for a long time. $37,500 seems really expensive to me. In 2010, we got a new Mazda5 (small minivan) for about $17,500. It was the perfect vehicle for us. The car had 3 rows of seating and can fit 6 people comfortably. We usually only use 4 seats, but the extra seats came in handy when we had visitors. It’s great to have a cargo area to haul stuff too.

I know it’s not really that cheap, but it is way more affordable than $37,500. Stay tuned until the end to read about the cheapest car I ever own. Anyway, I plan to drive our Mazda5 for 10 more years. We don’t drive much so it’s running pretty well. It only has 55,000 miles on it. The average cost per year should be quite good over our ownership period.

Now that we’re more comfortable financially, we could afford to buy a nicer car. But the average price of a new car looks excessively high to me. A recent accident reminds me why I still prefer a cheaper car. Life is easier with a cheap car. Read on…

I like nice cars, but I love money much more. If we were shopping for a car, I’d pick something not too expensive again. It’s all about priority. Right now, saving is more important than a car. Maybe that will change someday. Luxury and performance are nice, but they are not that high on my priority right now. Having money to invest is way better. Investment will appreciate. A car will only depreciate.

A better way to win the depreciation game is to buy used or a classic car. Used cars already lost a lot of value so depreciation won’t be that painful. The right classic car can hold its value or even appreciate over time.

Believe or not, we used to have a BMW Z3 roadster. I used to get so mad when I see a new ding or dent on that car. Why are people so inconsiderate with their car doors? Now that we have a cheaper car, dings and dent don’t bother me that much anymore. We have to park on the street after we moved so it’s great to a little apathetic. Bumpers are meant to be used in this neighborhood. 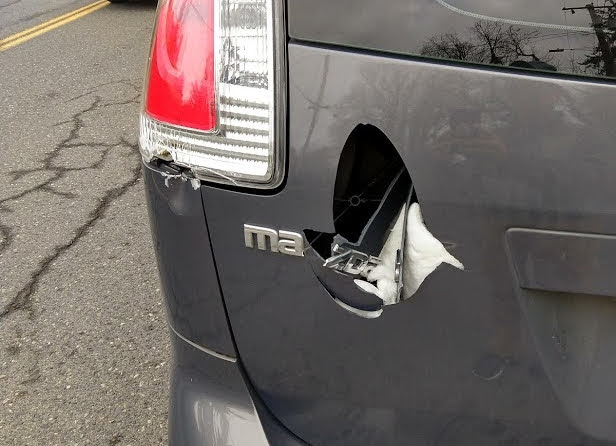 Accidents are even worse. A bicyclist ran into the back of our Mazda earlier this month. The bike made a big hole and several dents. The cost of repair is $4,600. That’s crazy! Fortunately, their insurance paid up. I’ll DIY the repair and I pocketed the payout. The total cost of supplies is about $50. That’s $4,750 in the bank. Oh yeah. (The insurance gave us an extra $200 to rent a car for 5 days.)

When you have a cheap car, it doesn’t have to look great as long as it runs well. If this happened to the BMW, I’d probably fix it up instead of pocketing the cash.

One lesson I learned from owning a BMW is that repair and maintenance are absurdly expensive for luxury brands. It seems like every time I took it in, the dealer charged over $1,000. I also felt more pressure to take the BMW to the dealer.

With our Mazda5, I don’t mind going to a local garage and see what they can do. Maintenance cost way less with a regular car than luxury cars. For example, I paid about $400 for a set of new tires a couple of years ago. New tires would have cost much more for the BMW Z3. Those performance tires are sticker, wider, and skinner – more expensive.

Another reason why I love our Mazda5 is that it is so anonymous. A gray minivan is basically invisible to the highway patrol. I haven’t gotten a ticket for years now. IMO, a flashy new car is much more likely to attract a speeding ticket. The police officer naturally points the speed gun to a flashy car first when a group of car appears. By the time he switches to my car, I’d have slowed down.

Oh, I also make sure not to be the fastest car on the freeway nowadays. That’s probably more important.

You can use your cheaper car to work side gigs with no quam. You could be an Uber driver, deliver pizza, or share out the car. I’d hesitate to do any of those if I have a nice car.

This one doesn’t apply to everyone. We have a flat registration fee here in Oregon. However, some states use the value of the vehicle to calculate the registration fee. In California, you’ll pay more if your car is worth more. A cheaper car means paying less for license and registration.

I always assumed those expensive cars cost more to insure. According to CBS, the 10 most expensive cars to insure are all luxury makes – Mercedes, BMW, Aston Martin, and Porsche. It looks like I’m mostly right. Regular cars are less expensive to ensure than luxury models. 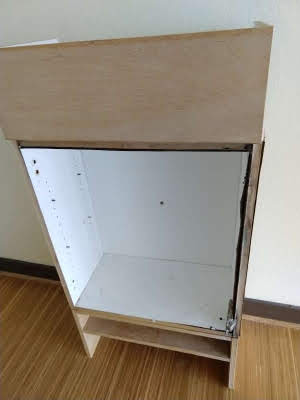 I have a question for those of you with expensive cars. What do you do when you need to haul a few bags of compost home or bring a moldy cabinet to the dump? Do you just toss it in the back like I do? It’s just easier with a cheaper vehicle. The nastiest thing we ever did with the car was to haul our old toilets to the recycling center. Yuk! I wouldn’t do that in a nice BMW X5. Would you?

I guess if you are wealthy enough to have a luxury car, you can pay people to haul crap to the dump. My contractor wanted $100 to dispose of an old cabinet for me. That’s ridiculous. I spent 5 minutes breaking it apart with a hammer then dropped it off at the dumpster. That’s a $100 saved.

10. Luxury features are not a big deal

Luxury and performance aren’t a big deal to me. As long as a car is reliable and has a good safety rating, that’s enough. I don’t drive fast so performance doesn’t matter.

I don’t care about the luxury features either.

I’m not a car guy anymore

Some people are passionate about cars and that’s okay. I’m just not one of them. A car needs to get us from point A to point B safely. That’s the main feature I’ll pay for. A regular car can be just as reliable and safe as a luxury car these days. I don’t see a point of shelling out more for an expensive car.

Okay, here is the promised story about the cheapest car I had. I got an ancient Subaru GL wagon for $500 as a second car. I used it to practice driving a stick shift and drove it to work. After a couple of years, I sold it to a friend for $500. See, I told you classic cars hold their value. That car was not safe, though. I wouldn’t put my son in it. I don’t think it even had airbags.

Alright, leave us a comment. Do you drive a cheap or an expensive car? Why pay more? What do you drive now?